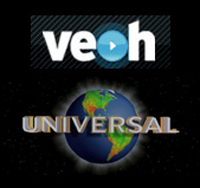 Things are not going well for Universal Music Group’s in its lawsuit against video-sharing site Veoh. First, the Los Angeles judge, A. Howard Matz, ruled last month that the safe harbor provisions of the Digital Millennium Copyright Act do apply to the case, contrary to UMG’s request for summary judgment.

On Monday, Veoh scored another point in the preliminary legal sparring that always precedes the main event. The same judge threw out the part of the complaint that named Veoh’s investors as defendants in the suit. UMG had tried to argue that Shelter Capital, Spark Capital, and Michael Eisner’s Tornante Company were guilty of “vicarious copyright infringement” and “inducement of copyright infringement” (yes, those are actual crimes) because they effectively control the company and sit on its board.

UMG cited as its precedent a case involving Napster and its then-single investor Bertelsmann, which actually was found guilty of vicarious copyright infringement, but only because Bertelsmann chose to keep Napster running even after it was obvious that it was an infringing service.

Judge Matz noted in his ruling that Veoh has so far not been found guilty of any copyright infringement, and his previous position on the DMCA’s protections shows that he understands the difference between users infringing copyright and Veoh. He also ruled that the mere act of being an investor or board member of a company facing copyright issues and fulfilling those normal duties does not constitute infringement, even if the company they “control” is found guilty.

Merely exercising ownership power to select members for a Board of Directors cannot invite derivative liability for infringement. Nor is there a common law duty for investors (even ones who collectively control the Board) “to remove copyrighted content,” in light of the DMCA. . . . these descriptions of how the Investor Defendants exercised control are the equivalent of “plain vanilla” characterizations of what directors ordinarily do . . . and are expected to do.

Rather, the board members and investors have to go out of their way to encourage copyright infringement. Yet if you read the ruling (embedded below), it is clear that Shelter and the other investors were doing everything they could to get rid of and filter out infringing content.

If this ruling and the last one are any indication, Universal Music Group has a tough road ahead as it presents its central case.