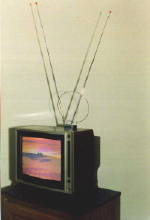 Folks, the DTV extension bill passed the House of Representatives. The switch to digital has been officially delayed for four months until June 12, 2009. According to a Reuturs report, there are 20 million people would have lost their TV signals if the almighty American government hadn’t stopped the switch. So by June 12th, 2009, there will probably be 19 million procrastinating Americans that will lose their TV signals. Let the confusion begin as this Act gives stations the option to switch off their analog broadcast on February 17 as originally planned.