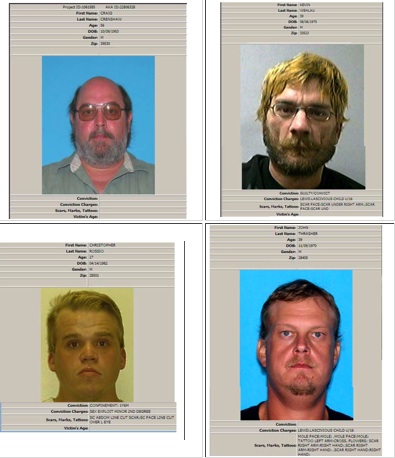 MySpace is in the spotlight today because it revealed that 90,000 registered sex offenders have been kicked off its site in the past two years. But where did all of those sex offenders go? Some evidence suggests that a portion of them are now on Facebook.

John Cardillo is a former New York City police officer and the CEO of Sentinel, a security technology firm based in Miami which helps MySpace, Bebo, MyYearbook, WePlay, and other social networks identify sex offenders. He goes so far as to call Facebook a “safe haven” for sex offenders. Needless to say, Facebook is not a client, and MySpace is his biggest one. But he shared some data with me that is hard to overlook.

Sentinel’s technology is the foundation for Sentinel SAFE, the software MySpace uses to identify sex offenders on its site. Sentinel SAFE is a database of more than 700,000 registered sex offenders in the U.S., complete with names, photos, dates of birth, email and IM addresses (when available), and more than a hundred other data points. Cardillo took the 90,000 sex offenders who were removed from MySpace and started looking for them on Facebook. He says:

We found over 8,000 offenders on their site without much effort. My professional opinion is that the real number is 15 to 20 times that.

The actual number of matches he found was 8,487. Rather than take his word for it, I have in my possession Cardillo’s spreadsheet with all the names. (Update: Only 4,679 of them, however, are matched to a Facebook user ID). I also have about 100 mugshots of sex offenders along with their corresponding Facebook profile names and pictures. (I’ve reproduced four of the mugshots above). A spot check of the mugshots, which are publicly available, matched names and photos in the National Sex Offender Registry. Once I had the names, it was pretty easy to find them on Facebook as well.

It is theoretically possible that people other than the sex offenders themselves created these Facebook accounts. Although they would have had to go to great lengths to do so (creating false profiles, culling all known information about these offenders, finding credible snapshots of the same people for their profile photos, setting up false e-mail accounts, and repeating the process thousands of times). And it is not clear why anyone would want to create a fake sex offender profile on Facebook. But even if this doesn’t prove that the actual sex offenders themselves created these profiles, it may not really matter.

In a deal with 49 state attorneys general last May, Facebook agreed to identify and remove “profiles of all registered sex offenders.” Presumably this policy covers all profiles on Facebook, regardless of who created them.

How much would it cost Facebook to license the Sentinel screening technology? I asked Cardillo, and he said “fractions of a penny per user.” With 150 million users, he said that would come to under $1 million.

It could be even cheaper for Facebook to develop its own software to check official state sex offender registries, something it has proposed doing in the past. Maybe this home-grown system is already in place. But judging from the matches that Cardillo found, Facebook’s sex offender detection system needs some work. Several groups are already popping up on Facebook itself with names like Get Child Molestors Off Facebook (11,761 members).

I’ve contacted Facebook, and have been told they will respond shortly. I will update this post as soon as I get it.

Obviously, we are going to investigate. We hope to define them and remove them as soon as possible.

He also cautions that these should be viewed as potential matches:

Facebook does not allow the same investigations by an outsider as by insiders. Saying there is a positive match of 8,000 sex offenders is difficult to for an outsider to do. You would need would need more than a name and a photo the size of your thumb. The correct way would be to characterize them as potential matches.

And he says this of Sentinal:

For a company that has a mission to keep kids safe, we find it irresponsible that they wouldn’t share this with us. Or, if not with us, how about with law enforcement? This could have been an announcement that Sentinel and Facebook removed 8,000 potential sex offenders. We still don’t have the information on who they are. If you are willing to share that with us, we will investigate immediately.

Update 2: Here is an official statement from Chris Kelly, Facebook’s chief privacy officer (who may be considering a run for California Attorney General), which explains how Facebook currently screens for sex offenders and works with attorneys general to remove them:

Protecting our users, especially the many children who use our site has always been a top priority for Facebook. We have devoted significant resources to developing innovative and complex systems to proactively monitor the site and its users, including those not on a sex offender registry, for suspicious activity (such as contacting minors or users of predominantly one gender).

We also have established a large team of professional investigators to evaluate any reports of potential abuse, including those surfaced by our systems or from our users. We have been working proactively with states’ attorneys general to run their lists of registered sex offenders against our user base. Our team uses various internal tools to automatically find matches. Any potential matches are evaluated more fully by our internal team of investigation professionals.

If we find that someone on a sex offender registry is a likely match to a user on Facebook, we notify law enforcement and disable the account. In some cases, law enforcement has asked us to leave the accounts active so that they may investigate the user further.

We have worked proactively to establish a publicly available national database available to everyone of registered sex offenders that enables real-time checks and includes important unique information like email addresses and IM handles. The passage of the KIDS Act, a measure we actively supported, was a major step forward and we’ve already contacted the new administration to offer our help in designing the real-time access features that it supports.

We are glad to be able to report that the success of these techniques means that we have not yet had to handle a case of a registered sex offender meeting a minor through Facebook. We are working hard to make sure it never happens and we are investigating Sentinel’s claim.

Kelly raises a valid point: Why isn’t there already a publicly available national database of registered sex offenders that can be used for such screening purposes?

Update 3: At the tail end of a press release from the office of Connecticut Attorney General Richard Blumenthal about the 90,000 sex offenders MySpace found on its site, the following sentence was appended:

Recent reports also indicate substantial numbers of convicted offenders with profiles on Facebook. Blumenthal said that his office is awaiting a response to his recent subpoena to Facebook.

The press release came out after this post was online.