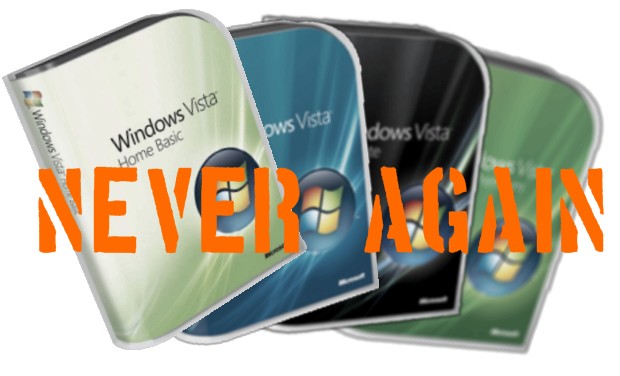 With everyone’s fears about multiple versions of Windows 7 confirmed today, the question on everybody’s lips is “why?” After all, they say themselves that they’re focusing on just the two main versions (Home Premium and Professional), and they must know, if not admit, that the various tiers of Vista hurt it badly. So why release these different versions?

Well, I hate to break it to you, but I don’t know. Nobody does for sure, though it probably has something to do with inertia. A body that’s blowing it tends to continue blowing it, and it was too much to expect that Microsoft would remove all the suck from Vista in one swoop. But this particular problem could have been solved with a minimum of fuss. Here’s how.

First, let’s just acknowledge that there’s a reason Microsoft does this many-editions thing. They serve such an enormous market that they have to have a product for an incredibly diverse clientele, which nonetheless divides essentially into three user classes: home, business, and big business. It makes sense to have different capabilities for different users and situations — that’s what modular computing is all about. But it doesn’t mean you have to flood the market with confusingly-named lookalike OSes. 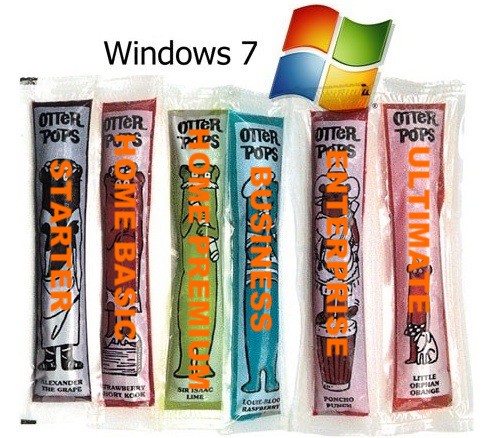 Can you imagine a Microsoft hot dog stand where they use the same wiener and bun in every hot dog, but if you want relish, or Sriracha sauce, you have to call it something completely different, and the menu has every configuration of hot dog included, with price? They could just have “Hot dog, $2” on the menu, and then “relish, 40¢ extra” and “Sriracha, 50¢ extra” on there. Yes, there’s a reason every hot dog stand does it like that. Because if they set it up like Microsoft does, people would get confused and go get something simple, like an apple (which could represent the obvious).

The workaround sounds simple, and it is: just offer one version. I call it “Windows 7,” though they’d probably add something to it. Here’s what it includes: everything that goes into Home Premium, since that’s the first “complete” version that isn’t crippled or ugly. It’d be priced like that “base” version as well. It’s all on a DVD or flash drive of course, and when you install it, it asks you whether you want the eye candy, the extra drivers — the fixins. Don’t need ’em? Won’t run on your stripped down machine? Click no and move on. Broken “Starter” version and questionable “Home Basic” edition removed from the lineup.

What about business users, who need mobility and security apps? Sell a suite of programs, like everyone else in the world! Business Connectivity Suite, $60 (package deal with Office!). Corporate Security Suite, $35 (special on orders over 1000 copies). Is that so hard? That way you have several truly distinct products, with easy-to-understand price points, and no one feels like they’re being ripped off or buying an incomplete version of the OS. Hell, Microsoft will probably gain sales from people buying these suites separately just in case.

Windows 7 is a promising OS, and I look forward to using it. But Microsoft’s marketing strategy leaves much to be desired, seeing as it’s already failed. One product. One price. Relish 40¢ extra.