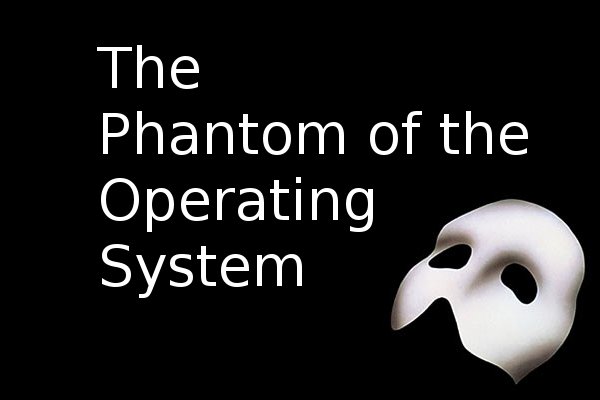 Russian programmer Dmitry Zavalishin is working on a revolutionary new concept for an operating system. In Zavalishin’s Phantom OS, snapshots of the entire system will be continually saved to disk, preserving state for running applications and active data. There are no files in the traditional sense, instead a file is merely an object with persistent state. Neat!

Phantom is new, but it can currently boot, execute applications, and continually save system state to disk. A GUI is planned, as are cross-development tools. The new OS is planning to support interpreted scripting languages like Ruby and Python, and virtual machine programming languages like C# and Java. What, no perl?!

The saved-state nature of Phantom makes it a real contender for both the mobile market, as well as servers. Switch off your phone running Phantom and then turn it back on with no loss of data or apparent interruption in what you were doing. For server environments, a power loss may no longer be a big deal.

It’s great to see real innovation in the OS space. Challenging the status quo may mean that Phantom has an uphill battle before it, but it’s refreshing to see people really thinking outside the box.