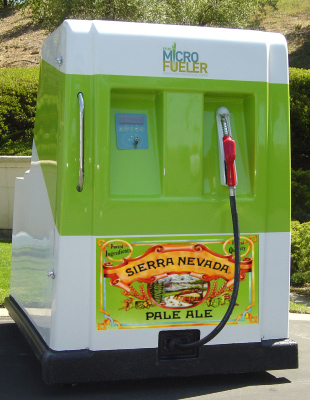 Beer, the third most popular beverage in the world after water and tea, just gained another reason for our support. Sierra Nevada Brewing, makers of fine beverages, recently purchased an EFuel 100 MicroFueler, which produces ethanol from water, sugar, and yeast. Guess what one of the major byproducts of beer fermentation is? Yup, yeast! The excess yeast left over from brewing will soon find its way into ethanol production.

Currently, Sierra Nevada’s 1.6 million gallons of excess yeast are used as a nutritional supplement to beef and dairy cows. Initially Sierra Nevada plans to use the MicroFueler to create ethanol fuel for its own fleet of cars. If sufficient fuel can be produced — ie: if we all keep drinking their sweet elixir — there’s talk of fueling employee cars as well as potential distribution.

Sierra Nevada is no stranger to environmental friendliness. They publish their solar power production, they recycle like crazy, and they’ve been using homemade biodiesel fuel for a couple years now:

In 2007, Sierra Nevada began a new program to utilize spent vegetable oil from the Taproom and Restaurant as an alternative fuel source for their fleet. Sierra Nevada purchased a Springboard biodiesel processor which produces 50 gal batches of biodiesel in 48 hours and is currently doing a batch a week. The finished biodiesel is used in the Sierra Nevada long haul and local route trucks.

Order a six pack for you, and one for your car! But don’t drink and drive.