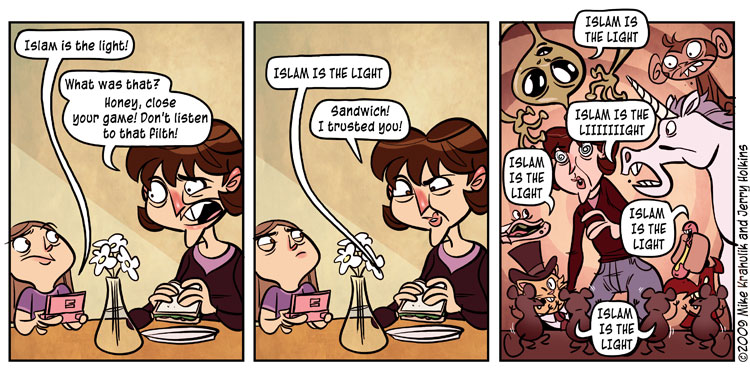 Mssrs. Des Arcades pointed out the strange absurdity of suburban housewives finding hidden Islamic messages in Mattel products. Is Islam the new Satanism? Heck, at this point the best they can hope for is that their kids don’t grow up atheist in the secular technocracy that is America. Why not encourage a little unfettered belief in one God?

To be honest, this is bull. As this TED talk points out the human mind is designed to pick out things it recognizes, be they real or not. We love faces so we see them on Mars and we love vocal communication so we think Led Zep is saying “I love Satan” in backwards recordings of “Stairway to Heaven.” Heck, even Procter and Gamble isn’t immune to wacky criticism.

Interestingly enough, the Islam is the Light conspiracy theory is now receiving all the attention it is because of computer technology. Some “audio experts” are comparing the waveforms of the two pieces of audio an have said that Mattel changed the “Islam” part to hide its true meaning. 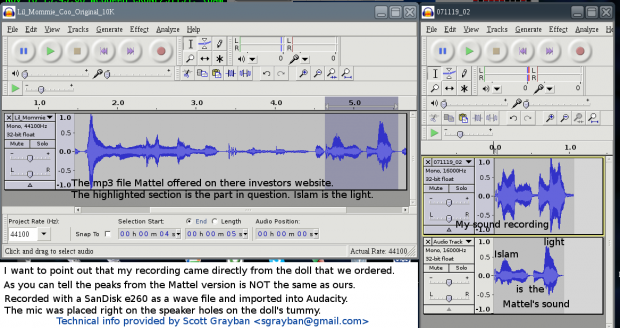 Most interestingly, however, is that once you hear the words you can’t unhear them. It becomes part of the audio. If I told you that the audio said “Go into the light” and that became a popular conception of the gibberish we would have an entirely different conversation on our hands. Instead, we face the modern bogeyman, Islam, and create a what amounts to a Crescent Scare, convincing thousands that a nefarious Fifth Column of secret Islamic proselytizers have embedded themselves in one of the most lawsuit fearing companies in the country. Let’s go back to blaming the dampening of America’s religious fervor on Satan, people. It’s far more satisfying to blast heavy metal music to scare parents than it is to play Cat Stevens over and over.