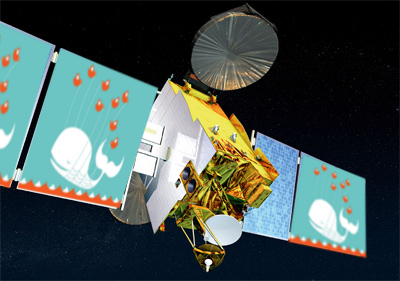 W2M, the first satellite to come out of a European/Indian joint venture signed in February 2006, was launched on December 20 for Paris-based Eutelsat. On the evening of January 22, a major malfunction occurred with the power system, prompting the Indian Space Research Organization to declare the satellite a failure.

Engineers will continue to try to revive some portion of the satellite for operation — after all, it’s hard to just say “Whoops, let’s hope the next one works better!” If the W2M can’t be revived, it’ll be navigated into a so-called “graveyard orbit”, along with all the other space debris, bringing the movie Wall-E one step closer to reality.

And you complain when your phone locks up!