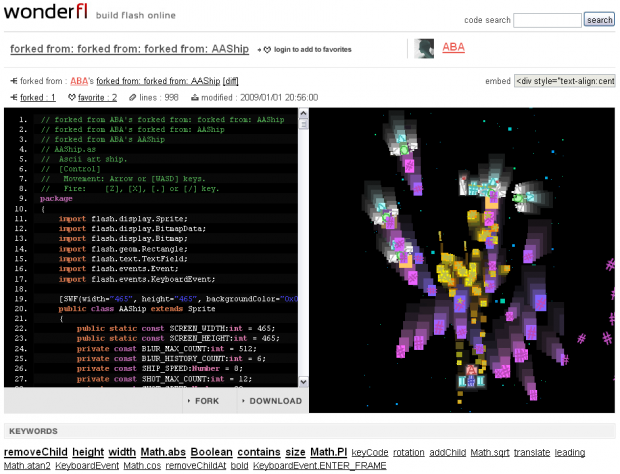 I’m no coder, but this sure looks like a useful tool for people interested not just in making Flash games and applications, but in learning how others do it and seeing what goes into, say, a Flash version of Tron. wonderfl’s two-pane, all-online system lets you write or paste code in the left, which is then compiled by the server and instantly displayed on the right. I have a couple friends dabbling in Flash development for whom this could be very handy.

The compiler and libraries are Actionscript3, which appears to be a widely-used standard (again, not a coder), so that should limit the amount of tweaking necessary to make something run there. Rudimentary graphics effects and control interfaces are ready to go.

The fun part is that since the code is such an integral part of the website, you can easily tweak others’ apps and games with a few keystrokes. Don’t like how fast your ship moves in that shooter? Fork the app, change an integer and you’re done. Or make more extensive changes — the resultant mutant app is saved under your own profile.

Already there are quite a few fun little games up there, among them a game-of-life-inspired shooter made up from less than 100 lines of code (not including libraries, of course). Embedding works just fine, as you can see here:

It’s not a replacement for your home development station, of course, but it’s an interesting community they’re creating, and populated by such seasoned indie game developers as Kenta Cho and Kei Mesuda. The whole point is creation and sharing, which is what I admire so much about the indie gaming scene. It’s hotbeds of activity like this that have given birth to things like Portal, Braid, Geometry Wars, and a million other started-small games.