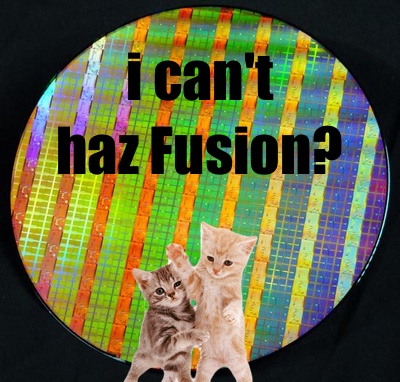 The economic crisis and resultant drop in spending has slowed down a lot of tech industries. Even the big players like Intel, NEC, and IBM are taking major hits, part of which is due to, well, people not buying their products. Intel in particular has delayed some rollouts due to a warehouses of Core2 processors and motherboards they expected to have sold by now. One such casualty is their GPU/CPU combo, which was probably to be launched later this year. 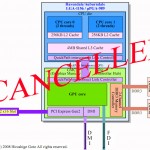 The architecture was (if I understand it correctly) a more Intel-driven version of the NVIDIA setups you see in unibody MacBooks. It was to use 45nm Havendale and Auburndale CPUs (desktop and mobile, respectively) and mysterious “iGFX” GPU parts to make a tightly integrated and possibly low-power solution that wouldn’t be NVIDIA-branded. The cold war between the two is stepping up, and Intel’s been taking more hits than NVIDIA so this was to be a return volley. Unfortunately it’s been cancelled due to market pressures; they had already been delayed but now that delay is… eternal. 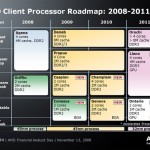 The good news? They’ve actually moved up dates on its successor, which was to come out in Fall of 2010, now scheduled for Q1 2010: a 32nm Arandale core combined with a GPU, which will further lower power consumption and allow for more transistors, as Penryn did for Core2. AMD’s equivalent offerings, codenamed Llano and Ontario, aren’t due until 2011, so Intel will still have the drop on them.

Feels a bit weird looking forward to things well over a year out, but as we’ve seen, these different processor combos enable new and better devices; without the Atom there would be no netbooks, for example. The next generation of interesting devices may be put off for a while due to the economy, but it should be worth waiting for.

Sorry about the LOLcat.