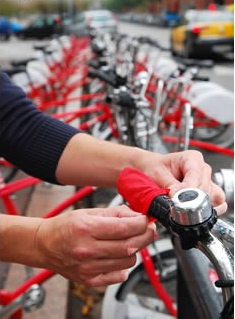 Looks like germophobes everywhere will appreciate this one. They’re condoms made for bicycle handlebars.

These were originally made for Gym bikes, but they have found themselves being used on publicly shared bikes in Barcelona. Since 130,000 people have signed up for that bike sharing program, germs can be a serious issue. Made by a company called Cyclean, the bike condoms are available in Barcelona bike shops for 5 Euros for a box of 18, and are said to be made of “non-woven cloth,” whatever that means.

Sure this may help save some people from contagious illnesses, but what about the environment? Aren’t there better alternatives? Anti-microbial handlebars? Gloves?