Play Hard Sports has spent the last 9 months developing a rich new Flash-based football game that puts generic Flash games to shame, featuring detailed graphics, intricate gameplay, and persistent stats. Today the company announced that it has signed Bill Cowher, a famed NFL coach best known for coaching the Steelers to a Super Bowl win, to provide color commentary for the game. To mark the occasion, the company has also decided to swap names (probably a wise decision) and will henceforth be known as “Quick Hit“.

While the game has yet to launch to the public, it is apparently impressing investors: earlier this month the company closed an $8 million Series B funding round, and has raised $13 million to date. In terms of quality, the game seems comparable to World Golf Tour, another rich Flash game that goes far beyond the basic casual games that get discarded after a few minutes.

Quick Hit is being designed to attract gamers and sports fans alike, and will offer persistent gameplay that tracks player stats and records between sessions. The game will also feature an online social community and an RPG-like leveling system allowing you to improve your team over time. Unfortunately we’ll still have to wait a while to see if the game plays as well as it looks: Quick Hit has plans to open up a public beta in June (a private beta may be launched before then), with its full release in August in time for the start of the NFL season. 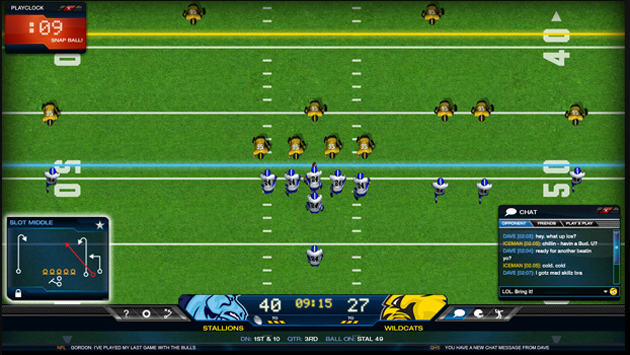