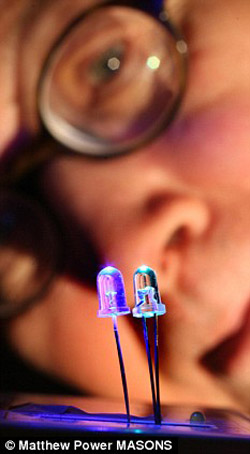 Thomas Edison patented the “long lasting filament” in 1880. In 2009, it’s fashionable to pretend to care about the environment. Are these two facts unrelated? Not really, no, because researchers at Cambridge University have developed a light bulb that uses light emitting diodes. These LED-based light bulbs not only, you know, brighten your day, but they’re also environmentally friendly. Everybody wins.

The new lightbulb is better than traditional tungsten and florescent ones in every respect. They’re cheaper, at around $2.85 (wow, the Pound has fallen!) per bulb; they last longer, rated at 100,000 hours; they use less electricity, possibly lowering the percentage of your electricity bill that lights account for (from 20 percent of your bill to 5 percent); they turn on instantly; they don’t use mercury, so you can dispose of ’em easily; and they’re smaller, meaning that you can use a bunch of them en masse without batting an eye.

Why did it take so long for LED light bulbs to become cheap enough for everyday consumer use? One of the materials that’s needed to create LEDs—gallium nitride—used to cost a whole lot. That’s because, as the Daily Mail so evocotively puts it, had to be “grown” on sapphire wafers. Total cost per LED light bulb back then: £20, or $28.