For better or for worse, YouTube has just made it easier to add annotations to your videos. Annotations, which were introduced to the site last June, consist of little grey popups that can include standard text boxes or speech bubbles, or offer interactive links to other clips. They’re useful when they’re used sparingly, but can also be more than a little annoying.

To insert the annotations, users previously had to use an editor tucked under the ‘edit video’ menu. Starting this week, you’ll be able to add annotations directly using a targeting crosshair that appears whenever you view a video that you’ve uploaded. Clicking on the video will bring up a menu asking which annotation you’d like to insert, and you can use a sliding bar on the video’s timeline to determine how long each one appears. A pair of arrows appear at the bottom of the video, allowing you to jump between each annotation so you don’t have to manually watch through the video to find them all.

Aside from the (possibly alarming) fact that this makes adding annotations easier, the addition is notable for what looks like one of the first implementations of Omnisio’s technology on YouTube. Omnisio, a company that allowed users to enhance their videos by creating mashups, adding comments, and interacting with other users, launched last spring and was acquired by YouTube only a few months later in July 2008.

Note: If you don’t like the annotations, you can always turn them off. 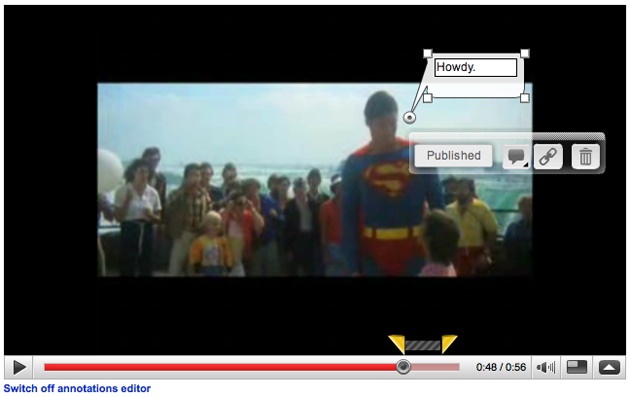