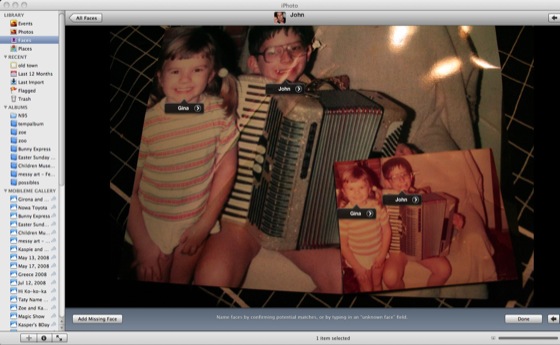 When we heard about iLife ’09 last month, Apple touted the Faces and Places features of the iPhone and image stabilization and precise editing in iMovie. How much does all of this pleasure cost? $79 or nothing if you get it with a new Mac. But is it worth the upgrade?

First, an important point for those unfamiliar with iLife: iLife is basically Apple’s answer to the bundled software you get with your computer. Whereas windows offers Paint, photo managers, and Movie Maker, iLife has always been, in my mind, the superior offering. On the whole I’m a big fan. It offers music, video, and photo editing and organizing software and comes free with Macs. Instead of reviewing the package as a new product, I am only highlighting the changes. If you don’t use a Mac and have never tried it, have a friend show you. It’s great.

The most prominent additions are Faces and Places. Places uses embedded GPS data to place your photos on a map and you can use this information to make map-based video travelogues. Although this is great for iPhone shots – the iPhone embeds GPS coordinates in every photo it takes – it’s not so great for owners of non-GPS enabled cameras. While there are plenty of folks out there who use and need GPS information in their photos, those folks probably aren’t using iPhoto. It’s a nice to have but not a real draw.

Faces, on the other hand, is quite interesting. If there’s one thing iLife generally does, it gives you new ways of managing your media. iPhoto is primarily an organizational tool and Faces is a unique method for organizing lots of photos very quickly.

It took about an hour to scan my MacBook’s photo library of 2,195 and once it did it took another half hour to train the software to recognize the faces it couldn’t quite make out. Once it got going, however, it was able to find almost everyone automatically. When it can’t figure out who someone is it places it under the list of “identified” photos and asks you to accept or reject it by hand. The process is a bit time consuming but if you do it once you don’t have to do it again.

Even on my limited laptop library – I haven’t let this thing loose on my bigger desktop library – the service offers an interesting new method for image discovery. For example, we’re always trying to find pictures of the kids we might have missed to print out or email to the grandparents. By being able to search for Kasper or Milla, they’re basically right there. Faces isn’t a gimmick. It’s an organizational tool.

Facebook and Flickr uploading are essentially Apple’s way of saying “We know you don’t care about MobileMe. Sorry.” Enough about that.

On to iMovie. Image stabilization is the most important new improvement and if you asked Devin he’d tell you it’s horrible. However, if you have the DTs like me or you hand the camera over to your hyperactive cousin for a minute while you sneeze you’ll be glad you can slow down the shakes and quakes.

Sadly, the new version is still missing slow motion and audio editing is still sub par. They sadly dumbed the product down in 2008 and never really brought back any of the most important features. 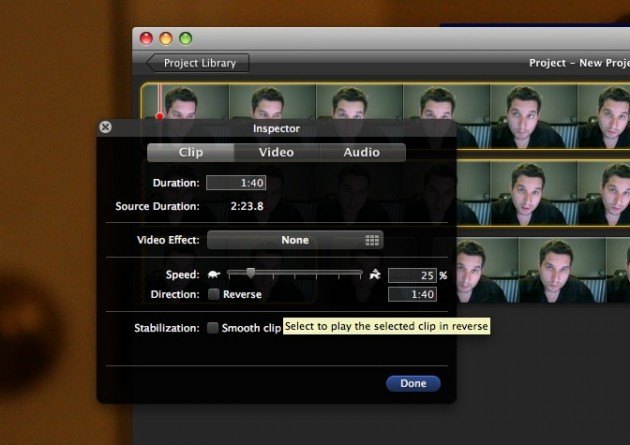 Mea culpa. I found slow motion, PIP, and greenscreen features but you have to turn on “Advanced Features” in preferences. Pretty sneaky. 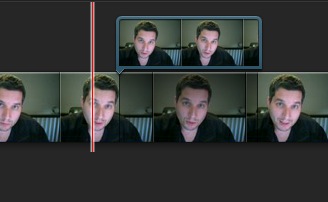 Garage Band, interestingly enough, has been improved by the dumbing down it received this release. For example, there is a Songwriting mode that gives you four tracks off the bat along with a basic drum track. Rather than offering a blank screen, Garage Band now understands that most music creation software is actually quite intimidating.

The new Lessons feature is cool as well. The product shows a video and then displays the chords played on a virtual guitar or piano. It even has a guitar tuner built in. I can only imagine how many budding musicians will be born thanks to this feature.

In short, iLife 09 is a semi-solid upgrade but probably not worth $79 if you’re not overly excited about Faces or Lessons. Folks who buy new Macs from now on will be very pleased with the new features but for folks who are not impressed by some cosmetic changes and a few feature additions, you might be able to sit this one out.