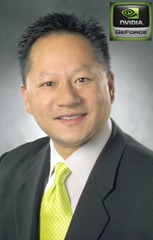 In an interview with Laptop Magazine, NVIDIA CEO Jen-Hsun Huang talks about the current state of netbooks, his company’s new Ion platform, rumors about Intel’s supposed strong-arming of device manufacturers, and other netbook and MID platforms from AMD, VIA, along with the probability behind netbooks powered by NVIDIA’s own Tegra platform.

On the current state of netbooks, Huang believes that they’re too underpowered to run modern software from the likes of EA, Adobe, and Microsoft, the three largest software companies in the world. The biggest area where netbooks are lacking is — surprise, surprise – in the graphics department. Huang believes that adding better GPUs to netbooks would improve things a lot.

Apparently, putting NVIDIA’s Ion GPU in a netbook would only add $30 to $40 to the price but it would also replace the Northbridge and the Southbridge, bringing that total back down a bit. “Almost every single OEM in the world is exploring it,” according to Huang, although he didn’t give a definite timeframe about when we’d see Ion-based computers on the market.

When asked about Intel’s take on Ion, specifically about rumors “that Intel is discouraging the uptake of Ion by forcing customers to buy the Atom processor and Intel’s chipset as a bundle,” Huang stated that he’d heard rumors but “couldn’t understand why Intel would limit great PCs from reaching the market. Great PCs help Intel. Great PCs help humanity.” He goes on to say:

“I would hope that Intel isn’t doing anything to prevent consumers from getting the most innovative products, in this case, built around Atom, their own processor. I think consumers would be really disappointed if they learned that Intel is sabotaging their ability to get access to breakthrough technologies…

On the subject of other competing platforms, Huang said that up against AMD’s Neo platform, “Atom by itself with integrated graphics would get crushed” but that “Atom plus Ion will give Neo a good run for its money.” He says he likes VIA’s Nano platform, saying that “it’s architecturally one generation beyond Atom” but that VIA lacks “the resources to build the GPU into the system to be competitive.” NVIDIA plans to support integrating Ion with Nano in the future, though.

Finally, when asked about Tegra, NVIDIA’s platform for smartphones and mobile internet devices, Huang said that it’d be able to power a ten-inch screen capable of displaying HD and 3D content with a full keyboard running Windows Mobile or Windows CE for two or three days before needing a recharge. The price of such a devices would be around $199.

“You can create a full keyboard device with about a 10-inch display. With a 10-inch display and a full keyboard you also have the opportunity to include a full notebook battery. You could have a two- or three-day computing experience without another charge. Now you’re talking about a device that exceeds the users’ expectations, and delight them in a way that would cause them to buy the product and keep it. I expect to see $199 full notebook–form factor MIDs, based on Windows Mobile and Windows CE; based on processors like Tegra with full HD capability, but consume less than a watt. It’s like a little motorcycle with a tanker behind it. How far can you go? Well, around the earth. Telcos could be giving them away for Internet access as part of  your cable service. I fully expect to see a whole new class of MIDs with full keyboards.”