Yahoo released its fourth quarter 2008 earnings today. Its non-GAAP EPS came in at $0.17 a share, above the $0.13 consensus. (Yahoo lost $0.22 a share on a GAAP basis due to restructuring and impairment charges). Total revenues came in at $1.8 billion, with net revenues (after what Yahoo pays to network partners) coming in at $1.375 billion.

Overall revenues were down one percent. In comparison, Google’s fourth quarter revenues were up 18 percent. Search revenues on Yahoo’s own sites were up 11 percent in the quarter to $436 million, while display advertising revenues was down 2 percent to $506 million. (See chart below). That is pretty much in line with industry trends. Affiliate, listings, and other marketing revenues were also down.

Did I come to Yahoo to sell the company? No. . . . Am I planning on immediately selling the search business? I did not come here with preconceived notions. It is very easy from the outside to have preconceived notions of what Yahoo should do. Now as an insider and CEO it is my job and responsibility to do what is best for customers, shareholders, and employees.

Later on in the call she reiterated:

This is not a company that needs to be pulled apart for the chickens.

Asked about rumors that Yahoo has been meeting with Microsoft, she replied:

We don’t have comments on press reports that come from nowhere.

That would be a reference to Valleywag.

She is basically signaling to investors that they should let her do her job. Her general message on the call is that outsiders cannot really know what is the best course of action for Yahoo. Fair enough. She has only been on the job for eight days. But she also isn’t communicating where she wants to take the company. What’s the plan, Carol? 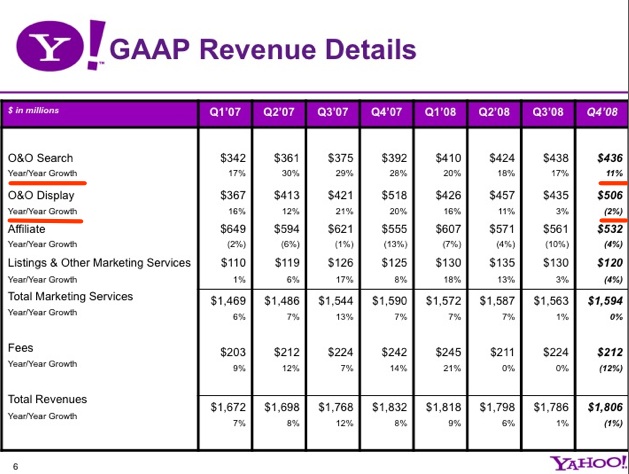