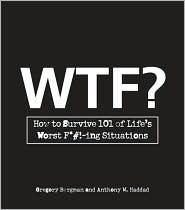 We don’t often review books on CrunchGear, mainly because books tend to lack that ever important “Gear” aspect that our readers expect of our posts. We strayed from that path a bit by publishing one book review back in October, which apparently was a sufficient signal to book publishers that CrunchGear is getting totally-super-serious about book reviews, and that they should bombard our inboxes every time they bind a few pieces of paper together. Tucked away within the mammoth pile of mundane crap was a handful of worthwhile reads – including a few that we figure might be of interest to our audience. Amongst this latter, elite group of CrunchGear-approved texts is WTF? How to Survive 101 of Life’s Worst F*#!-ing Situations by Gregory Bergman and Anthony W. Haddad.

There isn’t much to say about the book that you can’t immediately derive from the title. The authors conjured up 101 different craptastic situations ranging from mild (“You can’t remember where you parked”) to devastating (“You find out that you’re adopted”), providing potential solutions for each dilemma. From the acronym that leads the title, it should also be quite clear that the book isn’t meant to be taken seriously. For example, if “Your Teenager Only Communicates in Text Message Lingo”, the author’s suggestions go from “Make Her Call Someone” to “Break Her Thumbs”, but only because it’s not feasible to break all of her friend’s thumbs. At least one solution to each conundrum is rude and outlandish, but therein lies the humor. The book maintains a very Maddox-y feel throughout.

While it’s generally offensive, the authors do a bang up job of not crossing the line. You know, that line; the point where even the guy who tells Hellen Keller jokes to strangers turns his nose up in disgust? Take the section “You Think a Terrorist Just Moved into Your Neighborhood”, for example. It’s an easy joke to write, but also an incredibly easy way to offend a ton of readers if not handled with care. Right off the bat, the authors clears the air by mentioning that “only 21 percent of terrorism is perpetrated” by religious extremists – so rather than being afraid of any one group, we should all be afraid of everyone, all the time.

Coming in at 233 pages for just $9.95, the book is a solid deal for anyone looking for a good bathroom read. Don’t get it for your conservative uncle, and don’t expect to actually, you know, learn anything from the advice they give – but if you’re just looking for some laughs, this book’s got them on every page.