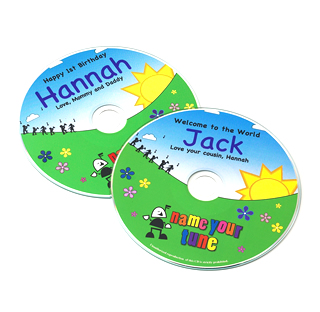 I recently did a horrible thing. Hoping to offer my son a little music to enjoy I downloaded 100 kid’s songs from iTunes for something like $7.99. I figured “Hey, kids like songs. 100 songs is a lot of songs. It’s a good deal.” I was wrong. I entered, for about two months, a circle of hell of which even Dante did not write: The Circle Dedicated to Listeners of Toddler Music.

So why am I doubling my pain with NameYourTune.com, a service that creates a CD with your kid’s name right in the song lyrics? Because this disk and service holds a special place in my heart and I suspect it’s somewhere in your heart as well, next to the Snoopy Sno-Kone Maker and Garbage Pail Kids. This is a blast straight out of my childhood and I’m happy to share it with parents out there even if it means I’m going to hear something like this:

Over and over again for the next six months.

The service is very basic: you pick a name and order a CD for $20. The CD includes 80 mentions of your child’s name and you can add multiple children to the mix. I had one made for Kasper and Milla and every other song is dedicated to a different child. I don’t know if they ever mention both children at once because I refuse to listen to this music in my house alone without a toddler nearby and I want to review the CD, which arrived today, before I hate it.

That last song is amazingly important. As far as I remember, that’s the song they used to advertise a similar service when I was a kid. That service offered cassette tapes with your name on them so it would be “Boom Boom, Ain’t It Great To Be Jaa-han!” or whatever. I think my friend Kris had one and I was amazingly jealous. His said “Boom Boom, Ain’t It Great To Be Kri-is!” It actually wasn’t great to be Kris – his parents divorced – but that meant his relatives spoiled him with stuff like personalized cassettes.

As Steven Johnson points out on BoingBoing, the things we remember so fondly from childhood rarely compare favorably to what we currently have for kids to play with. I could make a disc like this in about ten minutes using MP3s and pitch matching software. But I don’t think that’s the point. When Kasper comes home from school, he’s going to see this disc and be excited. He’s going to put it in, listen to it once, and then calmly place it on his shelf and won’t listen to it again and again. He’ll be excited to hear his name and so what if it’s cheesy and so what if it’s silly and so what if it’s dumb. He’s a kid and he’ll get as big a kick out of it as I did when I was his age. It’s worth the suffering.

Note: The line “He’s going to put it in, listen to it once, and then calmly place it on his shelf and won’t listen to it again and again” above is pure wishful thinking.