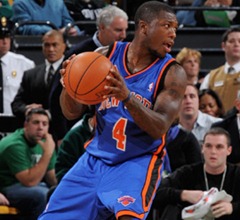 Wow, here’s a new one. Apparently Nate Robinson of the New York Knicks plays quite a bit on Xbox Live and constantly has trouble trying to prove to fellow gamers that he’s really Nate Robinson.

So in last night’s game against the Philadelphia 76ers, Robinson apparently made a special salute before shooting free throws in order to prove to someone on Xbox Live that it was really him playing Call of Duty: World at War.

In a 2007 interview, Robinson told SportsGamer.com,

“When I tell people I’m Nate Robinson from the Knicks they’re like, ‘Yeah, right. Get out of here!’ They don’t believe me. And I’m like what do I have to do to make you believe me? And I end up naming my whole team, naming their kids, everything.”

So whoever Robinson was recently playing Call of Duty with told him to make some sort of secret salute before his first round of free throws during Saturday’s game, which he did.