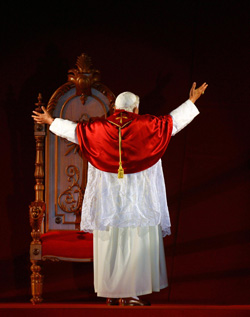 Any Papists in the house? Hooray for everything, then, as the Vatican has just launched its own dedicated YouTube channel. Now you can watch Pope Benedict XVI, in all his heavenly splendor, demand that y’all leave Steve Jobs alone. Something like that.

The point of this is to “secure the Pope’s presence on the Web,” and, presumably, to spread the voice of the Roman Catholic Church into the room’s of disaffected teenagers and the cubicles bored adults the world over.

The channel will host the usual: the Pope’s speeches, audio and video messages of peace and understanding, etc. You know, Pope stuff.

Apparently there’s a debate inside the Vatican as to just how effective the YouTube channel will be in drawing people to the Church’s message, and with good reason: are people more likely to use YouTube to look up girl fights, or to find divine inspiration? (I think we all know the answer to that one: girl fights.)

But good on the Pope and his happenin’ crew for embracing the Internet. Maybe he and President Obama can post video responses to each other now.