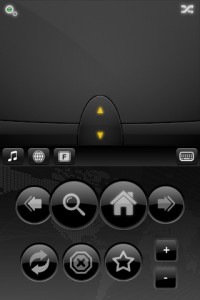 A few days ago I reviewed Snatch, an app that allows you to use your iPhone as a trackpad and keyboard to control any PC or Mac on your home network. A couple of commenters gave me a tip to check out Air Mouse, a similar app that they claimed offered greater functionality at a lower price. Always being game for a good software rumble, I spent a bit of time with Air Mouse tonight to see what all the fuss was about.

Air Mouse contains a lot of features similar to those found in Snatch: a full-screen multitouch trackpad, a keyboard, and remote controls to manipulate all your favorite apps. However, it also has a lot of bells and whistles that are nowhere to be found in Snatch, such as dedicated media and web browsing keys, as well as gyroscopic mouse control, a feature that allows you to move your cursor by waving your phone around in the air like some sort of 21st century smartphone-toting wizard. While the gyroscopic pointing seems to be a huge selling point of Air Mouse, I found it utterly unuseable. We use a lot of Gyration mice around my office, so I may be spoiled by the smooth-as-silk pointing that they afford, but it took all the concentration of a heated game of Jenga just to click generously-sized buttons on my screen, and I found myself retreating back to the tried-and-true trackpad method of input in short order.

That’s not to say that there aren’t areas where Air Mouse shines, however. The interface is incredibly polished, and makes Snatch feel clunky in comparison. I also really dug the landscape trackpad, which can be accessed by tilting your phone on its side. My favorite feature of the app, though, is its ability to detect when certain programs on your host computer have focus, and to remap the controls of your remote accordingly. The server comes pre-loaded with remotes for several commonly-used programs such as iTunes and VLC, and allows you to configure additional profiles for other programs you might wish to control.

I did encounter a huge bug when using Songbird: the app stopped functioning entirely when I opened it, and wouldn’t start working again until I minimized or closed the program. Whether this is a problem exclusive to Songbird or not I don’t know, but it’s a program I use often enough that it’s a big issue to me. I also would’ve liked to see more customization options with the remotes: you’re given a pre-set number of buttons, and while you’re free to reprogram them to whatever function you choose, it would be nice to have the option to add more. I understand that this was a design choice made for aesthetic reasons, and I can respect that, but it’s also the biggest reason I’ll continue to use Snatch as my remote input app of choice.

If you’re not concerned about gyroscopic mousing or button customization, though, Air Mouse is a solid choice for your iPhone mousing needs, and at two bones less than Snatch, it’s a pretty decent deal.