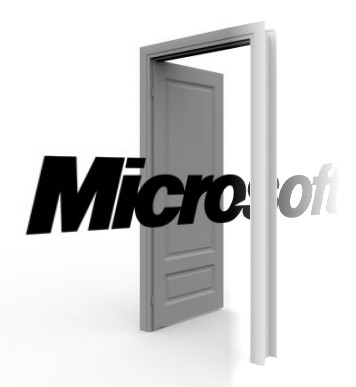 It’s not like Microsoft is going to be disappearing any time soon, especially with the success of the Windows 7 beta, but its death grip on the PC industry is being eroded on multiple fronts and it’s a good exercise to imagine what it might be like if MS were to take the French leave.

It’s important to note that the question of what happens after Microsoft doesn’t need to mean “what would happen if Microsoft left the picture entirely.” Mostly because that’s not going to happen: they’ll be a part of the post-Microsoft world too. “Microsoft” is more than a company, it’s a way of thinking about computing.

Microsoft has been the champion (that is to say both the winner and head promoter) of the single-unit personal computer since their dominance began. Their solution is wraparound, robust, and in a way, complete. But as the platform of the “personal computer” spreads further and further from the simple “box and monitor” concept — i.e. to phones, tweener devices, and appliances — the OS becomes stretched thin. As much as I like Windows 7, I don’t see it running my fridge.

This an interesting little piece that examines a few options of who would replace Microsoft as the Lord of the Manor. Google would certainly have a finger in that pie, but they’re shrewd enough to simply make themselves compatible with whatever platform took to the fore. Cisco and IBM are not nearly end-user-orientated enough to take over. Apple of course would surge, but the vacuum left by Microsoft would be impossible for them to fill. Linux, as Asay suggests, is on the rise, but despite his enthusiasm the OS not quite ready to assume the mantle.

So there’s no line of succession were Redmond to be sucked into a Wormhole (perish the thought). The Post-Microsoft PC world will have to emerge naturally out of the current one. But how?

There are two paths: fragmentation and modularization.

Fragmentation is what we see now, what we’ve been seeing for some time. Different OSes for different devices, different programs, different code bases, all with allowances for working with one another but not designed for it. We could continue down that path, but the number of devices and the variety of their needs are beginning to multiply more quickly than we can write for them. Viz. the plethora of mobiles and their disparate, semi-related OSes, either obscuring or overstating the capabilities of the hardware.

The point being that one OS won’t stretch far enough, and multiple OSes are too troublesome to maintain.

Modularization it is — if that’s even a word. A more optimistic person might call it “unification,” but realistically it’s not that but a more directed fragmentation. What needs to happen is the stripping down of the OS to its component parts, and the ability to apply them only where necessary. Linux OSes are the leader in this regard, being designed for it from the start, and Apple has demonstrated it somewhat with the quasi-OS X running on the iPhone. Windows has blown it for a while, and although their mobile and embedded solutions are potentially powerful, they are part of a labyrinthine set of dependencies and legacy requirements, caught in the enormous web of the Microsoft software ecosystem.

So you cut the thing to pieces. Modular is the future. Linux was born in pieces, and OS X is ready to be butchered. Microsoft is experimenting, and MinWin may be promising in this regard, but they’re late to the party.

The void left by the Personal Computer with one OS will be filled, as it were, with LEGO-like (or steak-like) building blocks, universally compatible (or at least adaptable) pick-and-choose bits built over a kernel or utterly barebones OS (Unix-like, MinWin, OS X, or other), itself really just a clearinghouse for instructions from the bits. Competition would be among developers for the same “space” in your OS, but competition would extend to the shell, the drivers, the file system, and so on. Sounds a bit like a widget or cloud OS (shudder), but would you call Photoshop and Firefox widgets? Would you load your graphics drivers from the cloud? Web services will increase in popularity and power, but I think well-connected desktop apps enjoy a hybrid vigor that is more essential to this little mix. Of course, the line between web and desktop is already blurry, and it’ll degrade further.

This is not an original idea (modular computing is an ideal pursued for decades), but it is one logical conclusion at this time for what might rush in to fill the void should Windows no longer apply. Making source code open will be essential if the blocks are to fit together, but free is not a necessity (although it would prove popular, as always).

With your permission, I’d like to coin a term for this building-block operating system: LEGOS. Got a ring to it. The original LEGO blocks are capitalized too, so that makes the ambiguous LegOS less of an option. And everybody likes a good portmanteau.

The great variety of OSes these days means the world is a hotbed for innovation, but in the end it is likely that the victor will be the big guy who best cannibalizes the competition. Unfortunately for Microsoft, their paradigm is being challenged (I swore I’d get through this without saying paradagm.. damn) and their OS philosophy is breaking down. Something smaller and more agile will be taking their place if they’re not careful. They may not be prepared to face the future, but we can sure as hell get ready for it.

[Images borrowed and manipulated, pipe up if they’re yours]