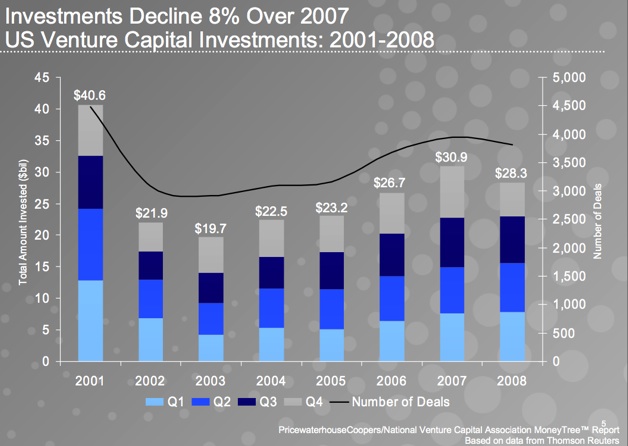 Venture capital firms tightened their purse strings in the fourth quarter of 2008, according to the latest MoneyTree Report released by the National Venture Capital Association and PricewaterhouseCoopers. The total dollar amount invested in venture financings was $5.4 billion, down 33 percent from the fourth quarter of 2007 (when it was $8.09 billion) and down 26 percent from the third quarter of 2008 (when it was $7.3 billion). For the entire year, the total venture capital invested into startups was $28.3 billion, down 8 percent.

The decline in investing mapped the decrease in exit options, even though VCs are supposed to have a 5 to 7 year investment horizon.

More money continued to flow into later stage deals. And broken down by sector, venture dollars going into Internet deals fell 26 percent quarter over quarter as well to $787 million across 170 deals (a 20 percent decline from the third quarter). Even investments in clean tech startups dipped 14 percent sequentially to $909 million across 62 deals. For the year, Internet financings were pretty much flat at $4.9 billion, while the dollars going into clean tech deals increased 52 percent to $4.1 billion. 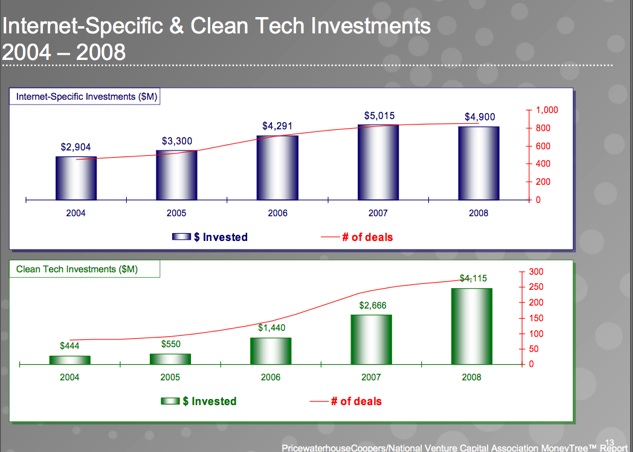 The ten largest venture fundings in the quarter were:

Interactive iCharts and the entire slide deck is embedded below: