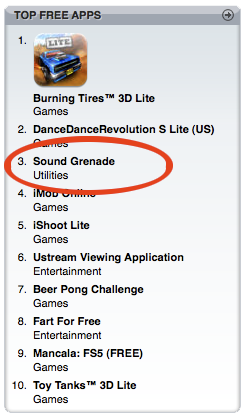 An anonymous programmer made something called the Sound Grenade for the App Store and gave it away free. It took him all of an hour to write – it’s just a button you press to make an annoying sound – and put it up for all and sundry. How he’s seen 100,000 downloads and is basically making $200 an hour using an in-app advertising system.

“I really enjoy the App Store, I think it is amazing,” the New Zealand-based programmer said. “If you know what you’re looking for, you can find an app and download it either paid or free in a very minimal amount of time from almost anywhere in the world.”

“The problem for the ‘quality’ app developers is they want to make theatrical films, and they can only premiere them at the same place as everybody else in the world,” he continued. “Let’s call it the YouTube of software.”

That’s right: lowest common denominator wins the day in the App Store, something I bet no other online store in the world – besides maybe iTunes – has seen. Has anyone seen stuff like this skyrocket so quickly on BlackBerry or WinMo?