EA Sports recently updated the rosters and player stats for both the Cardinals and the Steelers and squared the two teams off against each other in a simulation of the upcoming Super Bowl.

The first quarter was scoreless until the last two minutes when Ben Roethlisberger hit Santonio Holmes in the endzone for a touchdown from ten yards out, putting Pittsburgh on the board. Arizona answered on the ground early in the second quarter with an 8-yard touchdown by Edgerrin James. The tie didn’t last long, though, as Pittsburgh scored two more touchdowns – one by Willie Parker and one by Hines Ward – putting them up 21-7 going into the half.

Arizona came out in the second quarter and found a way to get James back into the endzone again, bringing the score to 21-14. But Pittsburgh was able to get Santonio Holmes his second touchdown of the day, putting the Steelers ahead by 14 points by the end of the third quarter.

The Cardinals were able to get Larry Fitzgerald a 15-yard touchdown halfway through the fourth quarter followed by a 45-yard Neil Rackers field goal with just over three minutes remaining in the game, bringing the score to 28-24 in favor of Pittsburgh.

In the end, the fabled Steel Curtain lived up to its name as the Cardinals ultimately fell to the Steelers, 28-24. The result of the win made Mike Tomlin the youngest coach to win a Super Bowl, at 36, and gave Pittsburgh its sixth franchise championship – also the second win in four years.

Of course, it’s anybody’s guess who will actually win the real-life game on February 1st.

January 23, 2009 – Black and gold will reign supreme in Tampa Bay, according to the official EA SPORTS simulation of Super Bowl XLIII by Madden NFL 09.  According to the award-winning video game, the Pittsburgh Steelers will win an unprecedented sixth Super Bowl title in a tightly contested game against the Arizona Cardinals, by a final score of 28-24.   Holding off a fourth quarter comeback by the Cardinals, the Steelers bring the Vince Lombardi trophy back to the Steel City for the second time in the past four years and for a sixth time in franchise history, setting an NFL record.

Madden NFL 09 is the most authentic and adaptable game in sports video game history, and utilizing each team’s current roster and the latest player statistics, EA SPORTS matched the Pittsburgh Steelers and Arizona Cardinals in a simulation of Super Bowl XLIII.  Ben Roethlisberger threw for 3 touchdowns and was named the Super Bowl MVP; joining teammate Hines Ward who was the Super Bowl XL MVP.  Steelers coach, Mike Tomlin, became the youngest coach in NFL history to win a Super Bowl, at the age of 36.

The start of Super Bowl XLIII became a defensive struggle, but Pittsburgh put the first points up with a 10-yard touchdown reception to Santonio Holmes, with less than two minutes left in the first quarter.

The Cardinals returned the favor with their reinvigorated running game as Edgerrin James diced through the vaunted Steelers defense with 8-yard touchdown run, near the start of the second quarter.  Pittsburgh, showing great balance, quickly swung the momentum in their favor with two consecutive touchdowns – a 10-yard scamper by “Fast” Willie Parker, and a 13-yard strike to Hines Ward.  The Steelers headed into halftime with a 21-7 lead and the route appeared to be on.

Despite their high-powered air attack, Arizona coach Ken Whisenhunt, kept to the successful running attack as the third quarter opened.  The Cardinals made a statement as again they punctured the Steel Curtain with an Edgerrin James 14-yard touchdown run; drawing the score to 21-14.  The Steelers, unfazed, looked like they had potentially put the Cards down for good with Santonio Holmes’s second touchdown reception.  At the close of the third quarter, the score was 28-14 in favor of Pittsburgh.

Taking a page from the Steelers defense, the Cardinals held tough and would not surrender any additional points.  This coupled with Pro-Bowl receiver, Larry Fitzgerald’s 15-yard touchdown catch midway through the 4th, brought the Cards within seven points.  Neil Rackers added a 45-yard field goal with 3:15 remaining in the game, closing the gap to 28-24.  On the following possession, Pittsburgh was able to break through for a few first downs; leaving the Arizona comeback short. 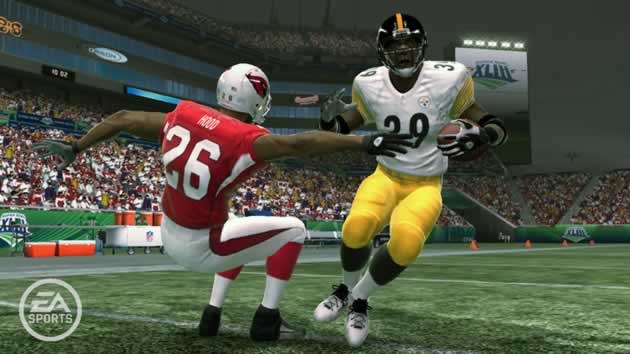