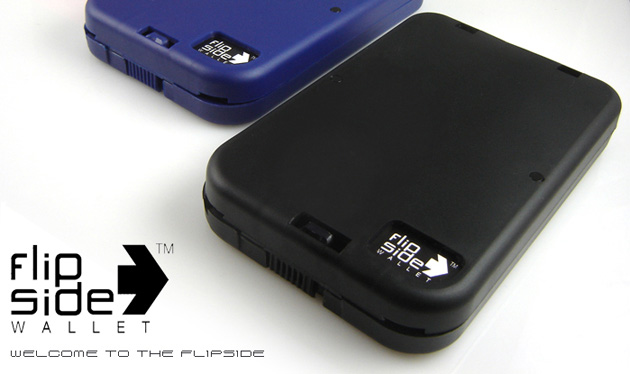 You know what’s the most annoying word in this whole technology song and dance? The word “revolutionary.” It’s a word that should only be applied to certain items. In the official CrunchGear chat room, we decided that we’d use the word to describe the iPhone (first mass market touchscreen smartphone), the Wii (it prints money), personal GPS (see Jerry Seinfeld’s take on GPS-assisted tech here), 3G/fast Internet everywhere (for Twitter, obviously) and Barack Obama. Now, nothing against Flipside Wallets, but its Flipside Wallet, fundamentally, is merely a wallet. Using the word “revolutionary” here is probably not appropriate. But what does it actually do?

Well, it’s a wallet. Wallets hold paper currency and various cards, be they of the credit or business variety. Flipside does do a few tricks that your current wallet probably doesn’t, though calling it “revolutionary” is a bit of a stretch. For starters it’s hard. Like, it’s made of tough plastic and not cheap, imitation leather. It also flips open like every cellphone in 2004 did, so that’s neat. There’s a lock to prevent prying eyes from accessing its contents. It prevents card de-magnetization, which happened to me in a very embarrassing episode in Berlin hotel last year. Oh, and it has RFID shielding, which isn’t exactly new.

So the wallet is neat, certainly; it may even be worth the $45 Flipside wants for it. But, frankly, we’re a little tired of seeing the word “revolutionary” like it’s worthless. Once upon a time the word really meant something, now it just means an iPod dock that glows in the dark.