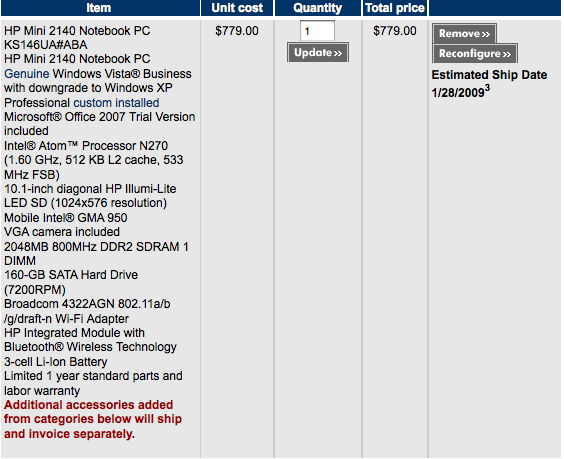 Everyone at CG knows how enamored I am with the HP Mini line and everyone at HP knows that I want a 2140 rigged with the Mi OS. Unfortunately, the 2140 is not offered with Mi, which makes me sad. I spoke to Doug about this over CES and wondered what would happen if I just swapped hard drives from an Mi to a 2140. We both concluded that the Mi and 2140 are virtually the same machines with the same specs but differing shells. I figure it’s worth a shot.

However, I just got off the phone with HP’s customer service to see when the high-res display 2140s would be available since they’re not listed and that’s the one that I want. Doug caught this yesterday as well. The rep told me they wouldn’t be available for another month. Just to see what the ship date would be for the high-end 2140 I’m told it would ship on the 28th of this month. How is this possible?

Doug’s assumption about the high-res displays starting with the $649 model is spot on. The SKUs change from “UT” to “UA”, which I believe denotes the change in display resolution. But, seriously, if I order the $779 model right now what will show up on my doorstep in a week or two? Something tells me my shipment will be delayed.

3 HP is not responsible for delays outside of our immediate control, including delays related to order processing or unexpected increase in demand. Typically only orders paid for by credit card receive credit approval on the same day the order is placed. Orders delayed due to order processing will default to an Estimated Ship Date 30 days from the date credit is processed and the order is released. Estimated Ship Dates are based on any known extended lead times.

Update: We just got word from HP that the high-res versions are six weeks out. That makes me sad.