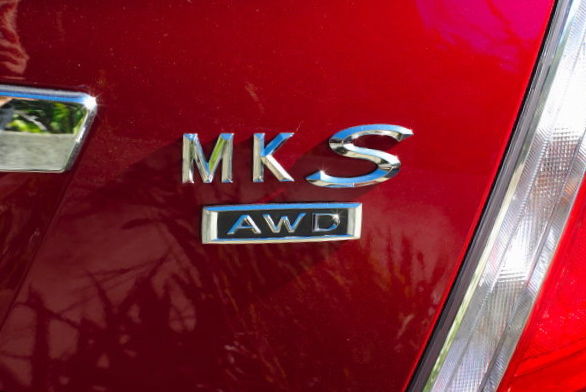 Test Drive is a new series that we’re starting at CrunchGear wherein we get a hands-on look at new or interesting modes of transportation. It’s not limited to just cars, either. We’ll take a look at just about anything from scooters to rockets and everything in between.

This ain’t your daddy’s Lincoln Town Car. In fact, it’s completely different than anything you’ve ever seen before. With balls to the wall power and a teeth shattering sound system, the MKS from Lincoln is a whole other beast. And I like it.

Like our other Test Drive features, I won’t get into the gearheadesque details of reviewing a car, but, rather, focus on the technological side of it. I will start with a few notes about how fast it is, though.

Flying down Highway 101 at over 100MPH has never been so comfortable and the exact opposite of petrifying. The 3.7-liter Ford Duratec V6 clone musters up 273 ponies and 270 pounds feet of torque. It’s fast and the AWD system ties the beast to the ground. Acceleration is a little wonky when in Standard drive mode. It revved a bit longer than I would have liked and didn’t want to switch gears. But in manual mode, the six-speed Lincoln was a powerhouse off the line. I had no idea how fast I was going on most occasions. How I walked away from my visit to the Bay Area without getting a ticket is beyond me.

The interior of the MKS is plush, to say the least. Covered in black leather the driver’s chair (as well as the rest of the cabin) is extremely comfortable and I’d say 90 percent of the comfort factor comes from the electronically adjustable seat. Sure, it does the standard adjustments, but the MKS has an adjustable lumbar support. You can pump it up or down depending on your preference and move it down towards your bum or upper-lower back.

Climate control systems are usually pretty featureless, but one aspect of the MKS climate control system stole my heart. I don’t do so well when it’s warm out. I’m not as bad as John Biggs wherein I sweat through my clothing in a matter of seconds, but I heat up pretty quickly. If you suffer from swamp of the ass then the cooling fans located in the bottom and backs of the driver or passenger seat will surely keep your core temperature under control. If you get cold easily you simply need to turn up the seat warmer and vice versa. Three variable levels keep you cool or warm at all times. This just might be my favorite feature in the MKS.

Or there’s the shifting headlight system that turns when you turn (while driving). The only downside and maybe this applies to all cars, but I didn’t think the MKS threw out enough light. I felt like I could only see 10 feet in front of me.

Like most Ford vehicles, the MKS comes with Sync and it sure made getting around the Bay easy. It comes at a price, though. The Ultimate Package will set you back $5715, but it comes with a ton of goodies like 19-inch rims, dual panel moonroofs, adaptive headlamps (turn when you turn), rear view camera, THX built 5.1 surround sound system and a voice activated navigation system. But I like the time sensitive greeting it gives me when I fire up the MKS.

Maybe I haven’t spent enough time with PNDs but after using a TomTom XL the weekend prior to receiving the MKS I have to say that in-car nav systems trump any and all PNDs. That shouldn’t really come as a surprise but you should know that Sync works fantastic. It even recognizes voice commands from those that aren’t native English speakers or those with heavy accents. Of course, you have to speak clearly enough for the sytem to register your command, but I was impressed with how well it worked. The only annoyance is the waiting between commands while the system offers you options. Routing and rerouting were snappy and are displayed beautifully on a big 8-inch touch screen. The British lady crammed into the dash is not annoying or berating like the ones found in PNDs.

When you’re roughly one mile from the next turn the display goes split-screen to show you what the exit will look like. If you’ve driven in the Bay or even LA area then you know how complicated some of the on- and off-ramps can be. Needless to say I adored the simplicity and acurateness of the navigation system in the MKS.

The center console offers a USB port and line-in port so you can recharge devices and/or plug in your iPod, Zune or “PlaysForSure” devices. A complete list of supported devices can be found here.

Ripping CDs to the built-in Jukebox is simple and whomever had the car before me left plenty of new and great bands to listen to. If memory serves me correctly, it’s a 20GB HDD that cannot be accessed by the owner. Unless you’re one of those nuts that likes to take things apart to see how they work.

Controls on the steering allow you to make/receive phone calls, control music playback and activate Sync without ever having to fiddle with touch screen or controls on the dashboard. I did run into a few occassions where you have to tag-team the system from the steering wheel and dashboard to pull up what I needed to see on the display.

One of the only issues I encountered with the Sync system was hooking up my iPhone 3G. For some odd reason it wouldn’t play back tracks through the system after having paired the device so I could make hands-free calls. I could search and see my library, but nothing was coming through the speakers. After hooking up another iPhone it started to work again. Not sure what happened there, but it was one of the faulty things I encountered during my review. The only other thing I noticed was that it didn’t list everything that was stored on my iP3G. For example, I have two Nico Vega EPs and only one of the albums would show up. But when I played all tracks in my library the EP that was missing was present in the playlist. Has anyone else encountered this?

In case you didn’t know, you can receive text messages while driving and the Sync system reads them aloud if you want it to. There are 15 existing replies you can choose from that makes things easier while you’re driving.

The MKS has keyless entry and a push button start. While the car was on I tried walking away with the key fob to see if the car would shut off but nothing happened, but I’d imagine it wouldn’t start if the fob weren’t in the car when started.

Understand that I haven’t driven in quite some time so I really liked the rear view camera that appeared when the car was put into Reverse. It displays three stages of closeness denoted by green, red and yellow lines. It beeps like all hell when you’re super close, too. There are also sensors in the front bumper that beep when you or something gets too close to you.

Now let’s talk about the first THX 5.1 surround system built for an automobile. Before we get into how it sounds let’s cover the basics. The MKS is equipped with 15 speakers, one 10-inch subwoofer and is powered by a combined 600W amplifier system that’s broken down over 12 individual amplifiers.

The highlight of the system for me is the center slot speaker that powers the Razer THX Mako 2.1 system. That one speaker alone pulls the entire system together to make it sound phenomenal. It’s also not as big as the speaker grill would have you think. The Ford engineers just want you to know that there’s a speaker there. The slot speaker only takes up a small section that’s roughly four or five inches by an inch or so. Those measurements aren’t correct but I don’t think they’re far off either.

It’s a bassy system and even when the bass is turned all the way down the system had no issues making my brain rattle while listening to Dr. Dre’s The Chronic. That’s not a bad thing but it depends on the type of music you listen to. I like bass, but I realize not everyone else does. You’re also going to need to crank up the volume for it to really bother you, too. Sound quality is top notch and cranking up the volume doesn’t affect that.

One of the drawbacks to raising the volume is that it makes it very hard to hear the nav system give commands. The system automatically cuts out the front speakers while giving directions but when it’s loud the rear speakers overpower the front. So be sure you have a rough idea of where you’re going or simply turn down the volume.

As a youth, I was into car stereo systems and having a system like this would have been a dream come true. The overall sound quality is crisp and clear.

The AWD MKS was a fun car to drive while I was at home. I know I drove a lot faster and blasted the stereo system louder than I should have, but it sure was fun. It sucks up a lot of gas, though. Estimated EPA is rated at 16MPG/City and 23MPG/Highway. The MKS we tested has an MSRP of $45570.

Some of these images were taken while driving so they might be blurry.