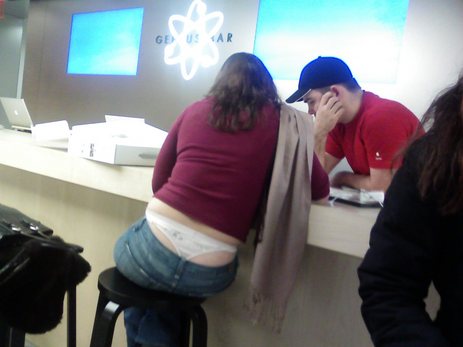 John “J to the B” Brownlee had a problem with his brand new MacBook Pro’s SuperDrive. He put in a Samsung press disk (you can’t trust Samsung further than you can throw them, incidentally) and the probably bent a little gate that kept the disk from ejecting – but I doubt he did. In short, he had a constantly spinning CD in his drive he couldn’t get out.

He tried everything including, sadly, sticking a business card in to disengage the drive. He took it into the Apple Store and he made the fatal mistake of admitting he tried unorthodox methods of disk ejection. He writes:

“I have a disc that refuses to eject from my MacBook Pro’s SuperDrive. This is literally the first disc I’ve inserted into it since buying the computer a few weeks ago. I tried all the usual tricks, like booting up with the mouse button held, and even going into Open Firmware. It didn’t work, so I tried using a business card to hold down the gate mechanism, but that didn’t work either.”

You can probably guess at which sentence my Apple Genius’ face went stony. He asked if I minded waiting a minute, and went into the backroom to open up the case and look at the drive. A couple minutes later, he came back with my disgorged SuperDrive in hand.

I know this stony face quite well. I suspect that Genius Bar employees receive a slow drip of morphine during the day. An overseeing ear, connected directly to Steve Jobs army of winged monkeys, listens for suspicious problems including, but not limited to:

When they hear evidence of this the morphine drip is shut off and the Genius Barista retreats to a place in his or her head where no reason or light can reach. There are a set of possible things to say and when you say the wrong one – any wrong one – they shut down.

Brownlee offers quite a few tips but my main tip is this: Act stupid. You don’t know anything about computers. You buy Apple products, after all. Go in, say “My computer is busted.” Have an iPhone problem? Restore the thing to the bare metal and walk in saying “I don’t know why I can’t make calls.”

One last, funny anecdote: My buddy bought an iPod Touche on eBay and found it was water damaged. He’s a handy fellow and tried to take them apart. He found that the water sensor was completely red so he covered over it with Wite Out, put the iPod together in a way that made it abundantly clear that someone had opened the damn thing, and took it to the Apple Store. They took the iPod back and gave him a brand new one, no questions asked. That’s right – although he had parts sticking out of the sides of the iPod, because he didn’t trip the water detector they were happy to take the thing back. It may not make sense, but in the alternate universe of Apple it makes perfect sense.