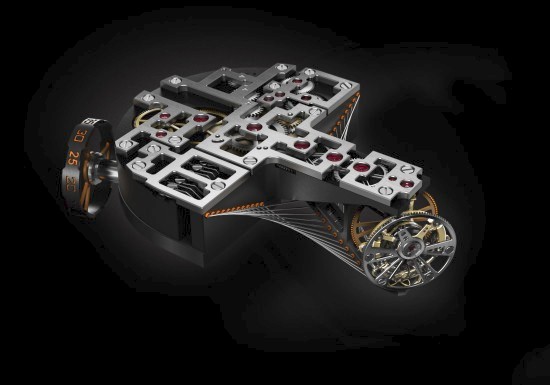 OK. Let me walk you through this one. First, take a look at the image above and read this press release:

Free, disruptive. The latest Concord specimen grants time a space that befits its very nature: free from constraints or ties. With an aerial bi-axial Tourbillon mechanism, a structure that makes emptiness its core material, a 3D dial, functional elements fitted to the side of the case and an industrial and minimalist spirit, the C1 QuantumGravity timepiece defies all laws, including that of watchmaking logic and most of all, of gravity.

The Tourbillon carriage, which is fitted outside the movement and case where it is suspended, literally, rotates in a multi-dimensional manner on two axes, the main one being vertical. The design of this disconcerting time device borrows its rigid and light structure from renowned cable-stayed bridges; an extended arm of cables fastened to the plate holds the cage in a vertical position, thus highlighting the sensation of autonomy.

Beneath the impressive sapphire crystal lies a panorama at its most extensive, giving shape to time, which becomes almost immaterial. While the dial strives to display the passing of time, it above all highlights empty space. The depth of its field of vision is dizzying and the feeling of levitation exhilarating. The officer-style hinged back excels in revealing the geometric circuit of the right-angled skeletonized bridges in a gigantic case measuring 47.5 mm in diameter and over 22 mm in depth. Its infinite precision holds many more temporal surprises…

The C1 QuantumGravity timepiece, designed by the “C Lab Series” team in conjunction with BNB Concept, takes watchmaking experimentation even further. It follows the impulse of a brand that defends its conviction of time inevitably linked to space. In this parallel and unconventional world, infatuation with non-conformity underscores Concord’s creative spirit. C1 QuantumGravity is the latest living proof.

Discover all the exciting features of the C1 QuantumGravity in Basel, from March 26, 2009.

All of this comes from Concord’s labs site, which looks like some sort of skunkworks project internal to Concord. I’ll unpack this release step by step so you can really understand what’s going on here.

First off, Concord is an old brand that for a long time was essentially dying. They’ve really made a comeback recently with some unique designs including the C1 Chronograph that follows another renaissance brand, Hublot, in the “big, bold, and brassy” category.

So what they did here was create a one-off watch with a bi-axial tourbillon, something folks have been doing for about ten years now. They did, however, suspend that tourbillion on little cables “outside” of the main movement and skeletonized the plates. They also laid out the components in a very unique way but at no point did they “defy logic,” as they state above.

Think of this as a concept car that will probably be made in the next few years for a few very rich collectors. It’s pretty striking and Concord clearly got some web-marketing chops and knows their audience – rich geeks. Is this amazing and new? Not really, but damn if the Concord site doesn’t have some techno on it.