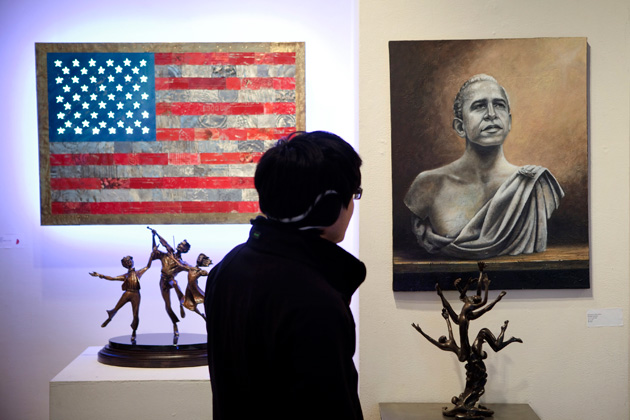 In just a few hours Barack Obama will place his hand on the Bible, look into John G. Roberts’ eyes, and take the oath of office. So I hear. With so many people expected to cram into Washington, what are the cellphone companies doing to ensure that your photos, texts and, oh yeah, phone calls go through while Washington celebrates? And how can you experience the thrill of the inauguration from the comfort of your own home?

One thing cellphone companies are doing is rolling out those mobile trucks that are used for sporting events, concerts, etc. They improve cellphone reception within a limited range and for a limited amount of time.

The companies are also asking people to, if they can, delay sending texts and photos in order to ease the strain on their networks. (I remember being at the Belmont Stakes last year with Gawker’s Richard Blakely, and cellphone reception on my Verizon phone was abysmal. We would have been better off tying two tin cans to each other in order to say, “Dude, where are you?”) You’re paying for a cellphone, but when you want to use it the most it craps out. Terrific!

CNN has its trusty live stream (and a Twitter!) so you can actually watch the events unfold.

Also, if you’re a satellite radio listener be sure to tune into P.O.T.U.S., which will have non-stop coverage. (That’s what I’ll be listening to, in addition to Anthony’s (of Opie and Anthony) on-air meltdown.) You can also tune into Sirius Left and The Power for sympathetic coverage. Conversely, you can head over to the Free Republic to watch anti-Obama people lose their minds. Our country is doomed, Washington rolling in his grave, etc.

Lastly, if you’re actually going to the inauguration, be sure to bundle up. since it’s going to be quite cold.

Have fun, or not!