Skout, a location-based social network similar to the likes of Loopt and BrightKite, has decided to take a new approach to mobile-based networking. In conjunction with the upcoming release of its first iPhone application, the site has decided to abandon its role as a standard social network, and is instead reinventing itself as one of the iPhone’s first location-based dating services.

CEO Christian Wiklund says that location-based functionality is increasingly becoming a commodity, and that networks are going to have to do something to differentiate themselves. While some of the larger networks do offer some features that involve flirting and meeting new people, Wiklund says that because these are only secondary features people will probably use them less.

The iPhone app is planned for release next week (you can see a preview of it below), and doesn’t seem to be too different from the apps we’ve seen from Loopt and BrightKite – it seems that the biggest difference will lie in the intent of its users.

To coincide with the new iPhone application, Skout will also be revamping its homepage to reflect its new goals. Fortunately Wiklund says that 83% of Skout’s 20,000 active users were using the network for dating and flirting already, so the switch shouldn’t be too jarring. The company has also brought on a set of new advisers to help guide its new position as a dating site, including match.com founder Gary Kremen.

I think that’s there’s a definite market for dating apps on the iPhone and other smart phones, but I question if there is demand for yet another dating network – many people already belong to established sites like Match.com and eHarmony, and won’t be eager to deal with yet another one. But if Skout can form partnerships with some of these established sites, offering either white-labeled application or importing their accounts into Skout, then it could do very well for itself (the site has already been in talks with some, but won’t say who). 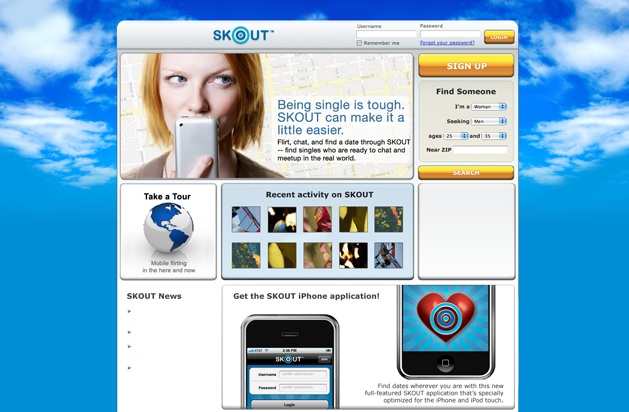