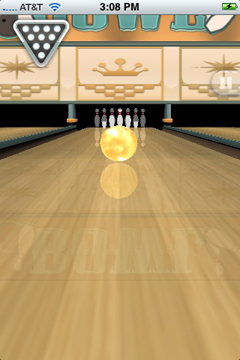 SGN has just released the latest update to its smash-hit iPhone game iBowl, which closed out 2008 as the 4th most popular game on the App Store. The version incorporates network support, allowing users to see what their friends online have just bowled, and adds another dimension to an already-great game.

We’re big fans of the Wii-like series of iPhone games to come from SGN. The games, which ask you to swing your iPhone around to mimic actions like swinging a golf club or toss a free-throw, have been extremely popular, with iBowl alone seeing over 4 million downloads.

But while these apps are innovative, when they were first released they failed to tap into the iPhone’s network effect – you could play with a few friends in the same room, but the games didn’t take advantage of the iPhone’s integrated Wi-Fi and cell network capabilities.

The new version allows gamers to play with friends or random opponents online. And unlike the multiplayer player version of iBasketball (which wasn’t that great because you couldn’t see how your friends were doing), the new version of iBowl lets you watch each of your friend’s bowls on-screen in real time. It isn’t perfect – there’s apparently no way to talk smack about your friend’s last gutterball, which is frustrating. But it’s much more fun than playing against the computer.