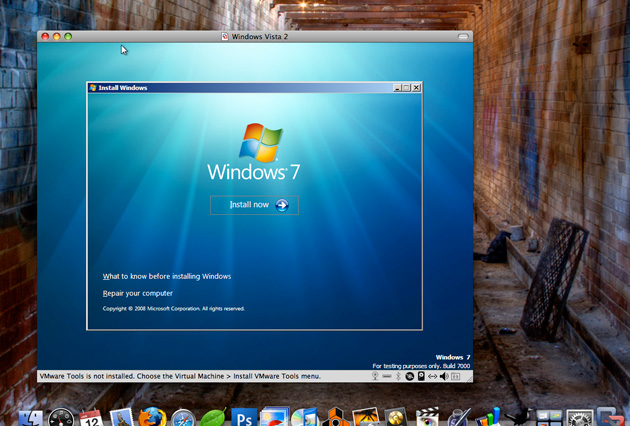 Windows 7 and I went for a little spin today and I’m pleased to report the old girl is doing quite well. As hard as it is to beleive, I’m not actually a total anti-Windows douche and I was actually very excited to be able to try out a fresh new version of Windows free and much earlier than expected.

I installed Win 7 under VMWare Fusion on my Mac Pro and I it took about three installs for the OS to “take” on my machine, one of the things that I used to hate about running Windows. While I understand and accept that perhaps the problem was between the keyboard and the chair, I refuse to accept that I as a fairly savvy computer user can’t install a new operating system outright. I know what you’re saying – “Bitch some more, n00b, you suck” – but if I had this trouble, I would definitely not give this disk to my Dad to install even on a stock PC.

This, however, is where my pain ended. I was greeted with the new OS in all its glory. I was never a big fan of Vista but the clean-up job they did on Win7 is quite admirable. The task bar is intuitive and useful, Aero has come into its own, and the ribbon theme that ran through later versions of Office has fallen to the wayside, replaced instead by a more-task oriented approach to application launching.

In terms of stability I see Win7 as another XP – a workhorse. Vista was Microsoft’s Windows Me move – some sort of strange itch that they have to scratch every few years while the pay lip service to “multimedia” and “user experience.”

As Scott wrote earlier today, Win7 feels like Linux or – dare I say it – OS X. In short, we find not much clutter to get in the way of a job well done.

I’m going to take the Pepsi challenge this week and use Win7 as my primary OS. It won’t be easy – because I’m a Mac Douche, obviously – but Win7 deserves a second and third look.