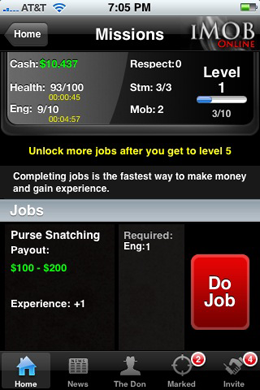 Mob Wars – a largely text based strategy game that throws users into a virtual underworld of organized crime – has become a Facebook phenomenon, with 2,680,129 monthly active users and monthly revenues rumored to exceed $1 million. The game isn’t the first of its kind (in fact, similar text-based games have been around for many years), but it is among the first to go truly mainstream.

Now Y Combinator startup Addmired is looking to capitalize on the popularity of Mob Wars and its ilk by developing a new game for the iPhone dubbed iMob Online. And while it would be easy to cast this aside as just another wannabe, the game is actually very well done, sporting a great looking interface with an intuitive menu system, as well as nifty features like GPS functionality and real-time messaging.

The game itself is too complex to fully describe in a few paragraphs, but the gameplay generally revolves around doing ‘jobs’, attacking other players to earn cash, and spending the proceeds to buy more powerful weapons and other items. It might not sound like much (especially given the lack of flashy graphics), but it can be incredibly addictive once you’ve gotten a grip on the basics.

One unique feature of iMob is its ability to use the iPhone’s GPS to find nearby players, who you can invite into your mob family (or presumably declare battle against). To increase the likelihood that you’ll run across iMob players in your region, the game has a ‘memory’ of your position for up to 24 hours, so you don’t necessarily have to be logged in for a friend to find you.

My biggest gripe about the game is the lack of a notification system – something that the developers have little control over. Despite promising background notifications months ago, Apple hasn’t made any mention of its progress for some time. Without notifications, you’ll need to repeatedly reopen the application to see if there are any urgent updates you need to attend to. The developers say that SMS or Email updates may become available in future updates.

iMob is free to play, but also offers a number of premium versions that include points that can be spent in-game (Zynga’s Poker app has a similar model). Unfortunately the App Store still doesn’t support in-game purchases, so developers are forced to rely on this less-than-elegant solution. Try the game out with the free version, and if you’re dead set on becoming a kingpin (without any of the hard work) then spring for a paid app.