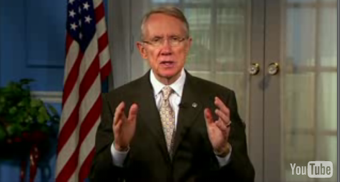 Can’t get enough speechifying from politicians on C-SPAN? Now you can catch them on YouTube . Many elected representatives in Congress already have their own YouTube channels, but YouTube has just launched two central hubs to make it easier to find videos from your Senator or Congressman.

These channels are pretty spare right now, but they tend to consist of actual speeches on the House or Senate floor (snooze), updates on upcoming legislation, or a call to action to get constituents to help support a particular bill (for instance, see Nevada Senator John Ensign’s video below on making the Internet tax ban permanent).

Most of these videos have very low view counts, less than 500 each. Nobody was watching these videos before. Putting them altogether in their own channel is not going to make them more popular. If Senators and Congressman want to use YouTube as a direct channel to the electorate, that’s great. But can someone teach these folks a little about Web video production values? They come across as little more than commercials.