As the newspaper industry continues to spiral into the abyss, one casualty will be the expensive foreign correspondent. Gathering on-the-ground reporting from far-flung locales does not come cheap. But GlobalPost, a new foreign news site that launched today, is applying a Web business model to international news.

The company plans to make money from advertising (good luck with that one—foreign news is always a tough sell), syndication fees to traditional newspapers and media sites, and $199 “Passport” memberships. The Passport service will give subscribers access to detailed country reports, monthly conference calls with the foreign correspondents, and priority in suggesting new story ideas.

This is not citizen journalism. It is high quality reporting from people who know what they are doing.

Each correspondent lives in the country he or she is covering. Each is supposed to submit at least one weekly dispatch, keep a journalist’s blog, and upload videos and photos to give a more personal, inside-account of what it is like to live in the countries being reported on. GlobalPost also serves as an outlet for stories that might not otherwise get printed. For instance, a story by Charlie Devereux in Venezuela explores the strange praying habits of the residents in the slums of Caracas starts this way:

CARACAS, Venezuela — In the Caracas slum of Pinto Salinas, William Andrade and his neighbors hold regular seances to summon the spirits of dead criminals.

The group often asks “santos malandros,” or “delinquent saints,” for protection, said Andrade, who earns a living making T-shirts. Among the criminals Andrade and his neighbors appeal to is Alexis the Rat, thought to have plied his trade in the Venezuelan capital during the 1970s and 1980s.

Along with quirky human interest stories like this, there is also coverage of of the fighting in Gaza, Iraq, Afghanistan, and elsewhere. The contributors are encouraged to build up a following and interact with their readers. Each post has comments, naturally. Balboni says:

We want to begin to build a great Amercan news organization that is covering the world in a voice that is familiar to Americans.

But a distributed news-gathering organization requires a distributed economic model. Rather than put each correspondent on a full six-figure salary with a housing allowance and all the extras that are typical for journalists working in foreign news bureaus, GlobalPost is treating them more like stringers. They are encouraged to keep their other news-writing jobs and supplement those with their GlobalPost dispatches.

In return for that minimum one post a week, they are paid a $1,000 monthly stipend and given 10,000 shares in the company. By giving them a stake in the company, Balboni thinks he can get beyond the us (journalists) versus them (management) mentality that pervades so many newsrooms today. And that may be the case for the first 65 contributors. But at some point the value of those shares will get diluted, and along with it the motivating factor for those contributors to give GlobalPost their best work. 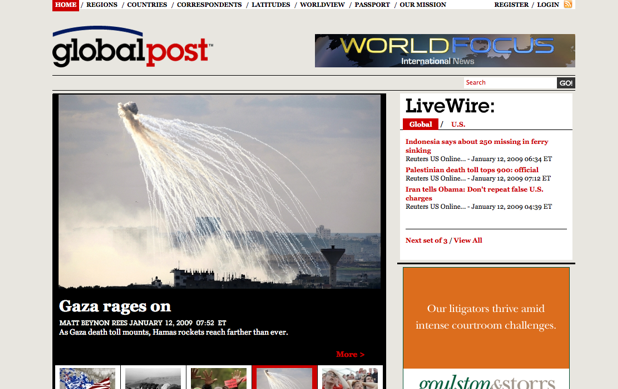