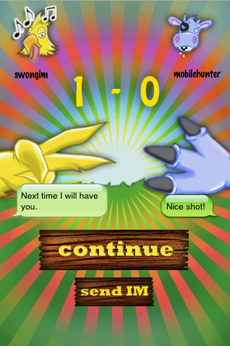 Zerion Software has just released an iPhone version of the playground classic Rochambeau (aka Rock-Paper-Scissors). And while it has some of the worst music I’ve ever heard, it’s actually surprisingly cool. You can download the free app on the App Store here.

The game allows you to play against the computer (which is about as fun as flipping a coin and guessing heads or tails), or against one of your friends through network play. Using your phone’s network connection (Edge, 3G, or Wi-Fi), you can either tell the phone to pair you up with the first available random opponent online, or use use the AIM instant messaging network to play against your buddies. Players can customize how many rounds each match should last, and can also choose if they’d like to be represented by goofy cartoon characters like cows and chickens. And if you’re using AIM, you can use an integrated chat feature to talk smack during the game.

Once you’ve found your match, you shake your phone in one of three ways to choose from either Rock, Paper, or Scissors. A few seconds later you’re shown if you’ve been crushed by your opponent or if the taste of victory is yours.

The UI could use an overhaul (it’s tricky to figure out how to get a game started), but once you get going it’s a good diversion. It’s also a great way to train for the USA Rock Paper Scissors League, which holds an annual tournament for a $50,000 grand prize.