Today during an Industry Insider Series keynote at CES in Las Vegas, AMD CEO Dirk Meyer and OTOY CEO Jules Urbach announced that AMD has been working on what it’s calling the world’s “fastest supercomputer ever”, designed “to break the one petaFLOPS barrier and to process a million compute threads across more than 1000 graphics processors”.

The supercomputer, dubbed the “Fusion Render Cloud”, will run OTOY’s graphics rendering software, which as we reported last July, is intended to deliver high-end 3D graphics through the cloud by preprocessing them on servers before delivering them over the web to thin devices.

Urbach considers this supercomputer a big step in delivering on OTOY’s promise, which requires large-scale computational power to service the processing needs of many end users who rely on central computing in lieu of graphics cards in their own devices. He says that 10% of the computer has already been built and that AMD plans to have it ready for beta testing by mid-2009. While he anticipates that many more supercomputers will be needed to scale OTOY’s technology globally (this supercomputer is “just a sliver of a percent of what you need”), AMD has committed to improving this first supercomputer over time with its latest hardware. It’s intended to support up to 1 million users. 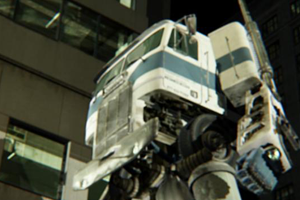 AMD says that it’s already responsible for seven of the world’s ten fastest computers, including the first and second fastest. This supercomputer, which is being built in Burbank, California, will presumably give AMD all three top spots.

Even with today’s announcement, it is yet to be seen whether AMD’s hardware can get OTOY’s server-side rendering to scale effectively, let alone work over the broadband connections available to most end users. We also have yet to hear more about Liveplace’s virtual world, which is being powered by OTOY.