MixedInk, a document editing site that allows large groups to democratically create a single collaborative document, has launched its service to the public. The service fuses concepts from Digg and popular wiki sites to create a unique document creation tool that is ideal for groups far larger than you’d normally encounter in the workplace. In conjunction with today’s public launch, the site has also partnered with Slate to create a community-written inauguration speech for President Obama, which will be published on the site in two weeks.

While there are quite a few collaborative document services available (including Google Docs, Zoho, and the just-announced new version of iWork), most of these services focus on letting a small group of people interact. Unfortunately, these services are clumsy for large-scale collaboration with groups of more than a dozen or so people, as it becomes difficult to reach a consensus and certain sections are repeatedly overwritten.

MixedInk is taking a different approach to collaboration, allowing users to draft their documents using a Digg-like voting system. Instead of constantly editing the same document, users are invited to submit their own versions, which can then be voted on and rated by their peers. As they they read drafts submitted by others, users can mouse-over the passages they like most and incorporate them into their own submissions (the system will also suggest popular passages as you write using keyword detection). Over time, the most popular passages and versions float to the top until the entire group is satisfied and voting ends.

MixedInk probably won’t be useful for small groups (it would probably be easier to pick up a phone), but for larger scale initiatives it could become a great alternative to traditional Wiki systems, which often use confusing versioning systems. The system has already been put to the test on some very large-scale documents: over the summer the technology was used by the Netroots community to write its platform.

The service is available for free to users who create documents on MixedInk’s site, with a premium version available for branded enterprise solutions and possible integration into other sites. 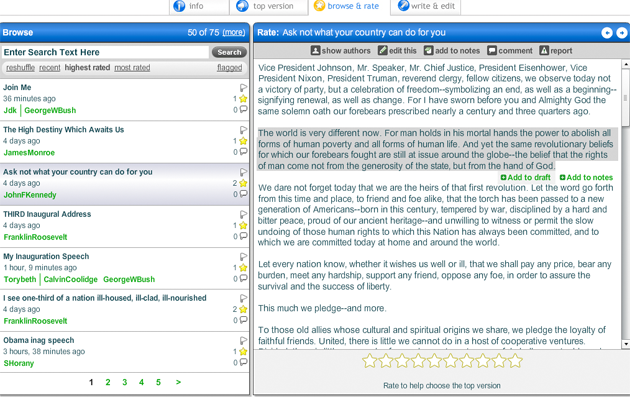