This guest post was written by Bryan Barletta, lead reviewer at AppVee, a site that offers iPhone app reviews and news. Barletta has picked out some of the App Store’s best applications, and we’ve embedded video reviews for some of them (click the corresponding review link to view a video if it isn’t already embedded). Also be sure to check out our picks of the hottest iPhone apps from back in July when the App Store first launched. 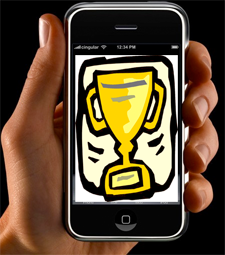 The iPhone and iPod Touch have taken the world by storm. In just a little over six months time we’ve witnessed the doors of the iTunes App Store opening to the 10,000 app marker being crossed. In between that time we’ve see the $999 I’m Rich make several people poor, fart joke apps earning over $25K in one day, and Apple still looking the other way when users mention copy and paste. And with the number of total apps reaching over 13,500 less than a month since the 10,000 mark was passed, that growth is showing no signs of stopping. But some of these stand out much more than others do, so we’ve tried to hone in on the cream of the crop.

Tweetie
An easy to use and full featured Twitter app that is speedy. The app has quite a bit of competition (other popular apps include Twitterfon and Twitterific).
Link: AppVee’s Tweetie Review

Pandora
Browse through the music genome and find new artists that fit your taste. These are automatically recommended by the site’s algorithm, so it acts like a personalized radio that works surprisingly well.
Link: AppVee’s Pandora Review

RJDJ Album
Let your iPhone and the world around you create unique and original music. The app uses external inputs (like sound) to create a dynamic soundtrack).
Link: AppVee’s RjDj Review

Camerabag
Emulate 5 different camera and film setting directly from your iPhone. This helps spice up the photos you’re taking with the phone (the default application doesn’t offer much in the way of effects.
Link: AppVee’s Camerabag Review

Vlingo
Voice control nearly every aspect of your iPhone and more – it’s like a more powerful version of the highly hyped (and still-impressive) Google Mobile App.
Link: AppVee’s Vlingo Review

Evernote
Keep track of everything you could possibly want to remember (like notes or photos) whether you’re on the go or at home.
Link: Appvee’s Evernote Review

Rolando
An epic platform adventure game for the iPhone and iPod Touch, this is easily one of the most innovate games to hit the platform.
Link: AppVee’s Rolando Review

Jellycar
A unique puzzle game that asks you to guide your “jelly car” to an endzone. As with most of the other games on this list, this is highly addictive.
Link: AppVee’s Jellycar Review

Scramboni
A multiplayer online word game for the iPhone and iPod Touch. Multiplayer games on the iPhone are still rarer than they should be, and being able to play online definitely adds an extra dimension to the gameplay.
Link: AppVee’s Scramboni Review

Dr. Awesome
Save your friends and family from deadly micro viruses in this iPhone and iPod Touch game.
Link: AppVee’s Dr. Awesome Review

Up There
Guide your balloon through various obstacles as you attempt to get the highest score
Link: AppVee’s Up There Review

Flick Fishing
Forget your fishing rod – this uses the iPhone’s accelerometer to allow you to mimic a realistic fishing motion to cast a line. Also check out many of SGN’s games, which feature similar motion detection.
Link: AppVee’s Flick Fishing Review

Hero of Sparta
Control King Argos as you battle the Gods and their minions in this action adventure game.
Link: AppVee’s Hero of Sparta Review

While it’s easy to simply break down the top apps and games that we’ve enjoyed in 2008, it becomes a lot more difficult to find just five apps that took a chance and brought more innovation to the iPhone and iPod Touch. Below are the five apps we feel helped define the future of apps on these devices.

The future of the iPhone and iPod Touch is wide open, to some degree. Depending on what restrictions Apple decides to lift. Developers are already chomping at the bit to release a video recording option as well as the ability for apps to run in the background. While those factors sit solely on the shoulders of Apple as they have been proven possible by the jailbroken community, there are quite a few things that we as consumers should expect out of the apps we’ll see in 2009.

With titles like Rhythm Spirit, a rhythm fighting game based on Japanese folklore, and Myst, a remake of the classic adventure game, making their way over to the iPhone and iPod Touch sometime in 2009 we’ve got some idea of what to look forward to. The real question is: What will be our Ocarina? Our Rolando? What apps are going to challenge the capabilities of this phone and create such a large hype that we find ourselves begging for just one more screenshot or bit of information? We’ll have to wait and see what the App Store has in store for us in 2009 as we count down the remaining hours.

2008 was all about experimenting. A fantastic device emerged, developers went crazy, and we’ve been flooded. Its now time to settle down, dig in and create some revolutionary applications. 2009 is going to be all about quality and depth. We’re going to see richer games that rival the DS and PSP, applications that truly make this device a portable computer, and multi-user apps that really start connecting people. Mobile social gaming is going to be huge and we can’t wait to see what developers have in store for us in the New Year.