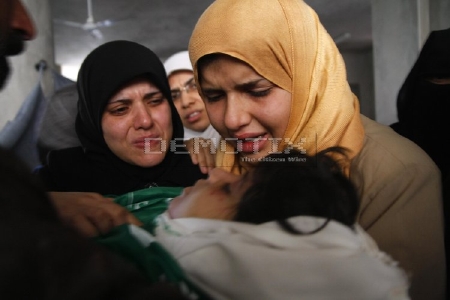 Demotix, a new startup coming out of London, is taking a pretty raw approach to reinventing the newswire and with the wave of news coming out of the Israel/Palestinian conflict right now it is coming into its own. If you ever wanted to know what life and death was like on the ground in the middle of a war this is it, direct from ground zero. The idea is simple: anyone can shoot video or photos at a news event like a protest and upload the content to the site. The site only takes photos right now but text and video are due soon. Everyone who uses Demotix will keep the copyright and the right to remove the images from the website. The non-exclusive images will be sold for anywhere from between $150- $3,000, and videos will be sold by $500-$1,000/minute. Demotix shares 50 percent of the revenue from each sale with the person who contributed the content. Demotix has six-full time staff members and six full-time interns. The site has launched in Beta but in the next fortnight launches a full version, along with an Arabic version.