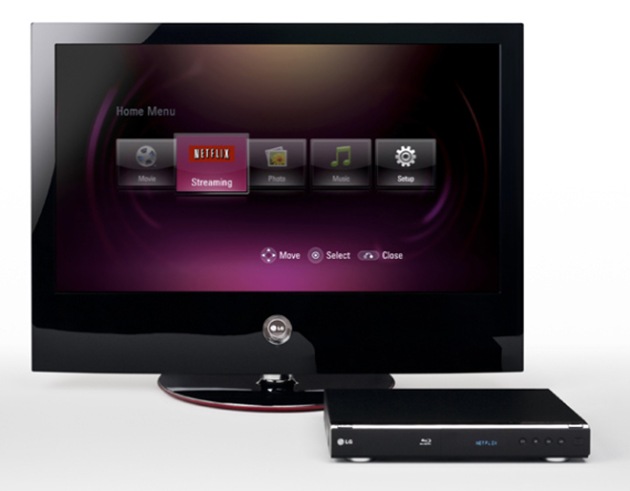 LG will be unveiling its new line of Blu-ray players at CES next week, but has announced today that its upcoming network-enabled models will feature Netflix streaming (already available on current models) along with additional streaming content from CinemaNow and YouTube.

That’s a smart move because it effectively takes the gun out of the hands of those who question why they’d buy a Blu-ray player when everything’s slowly-but-surely moving online. In this case, you get the option to play Blu-ray discs, plus HD content from Netflix, more HD content from CinemaNow, and YouTube content, which appears to be shifting to HD sooner or later.

All this, plus a ten-foot interface navigated by a familiar remote control — no Media Center PC, no Xbox 360 Extender, etc. It might just catch on with "regular" people. The question now comes down to price. If companies can aggressively price these Blu-ray players in 2009, we might see more and more of them turning up in people’s homes. I haven’t upgraded my DVD player yet because I don’t care all that much about the difference in visual quality but, hey, my DVD player doesn’t stream Netflix, CinemaNow, and YouTube.

CinemaNow – an innovator in digital entertainment technology, delivering high-quality movies, TV shows and videos to users through online connectivity – and YouTube – a leading online video community for people to discover, watch, and share originally created videos – will be available in LG’s 2009 line of Network Blu-ray Disc players to be unveiled next week at the 2009 International CES(R).

"From Blu-ray to instant streaming from Netflix to CinemaNow and YouTube, LG is bridging the gap between packaged media and video-on-demand services to provide entertainment solutions for consumers’ demand for content," he said. "With these new alliances, LG continues its innovation leadership by allowing consumers easy access to multiple entertainment options in one device."

CinemaNow has pushed the envelope of digital video distribution, becoming the first Web site to offer Pay-Per-View movies from major studios and the first broadband distributor of high definition (HD) content. Collaborating with CinemaNow will enable LG Electronics to offer consumers access to more than 14,000 titles from the major movie studios, broadcast and cable television shows, more than 250 independent film titles and music videos from all major labels. Key benefits include the capability to:

Leading the way in providing unlimited access to online content, LG’s alliance with a prolific online video community, YouTube, will allow consumers to instantly stream millions of Web videos directly from the Internet to an LG Network Blu-ray Player for viewing on their television (without a personal computer). Key benefits include:

LG’s full line of Network Blu-ray Disc Players, additional new content alliances and other new products will be revealed at the LG Electronics CES press conference on Jan. 7, 2009 at the Venetian/Sands and will be on display at the 2009 International CES – Booth #8214, Central Hall, Las Vegas Convention Center.