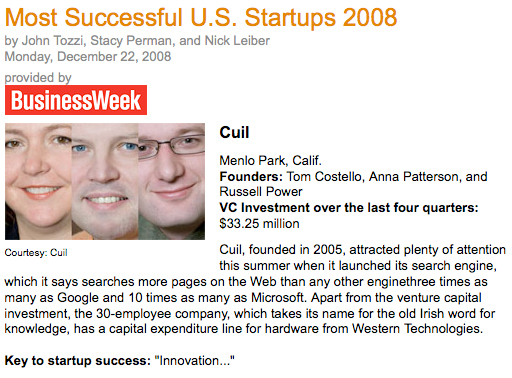 Here’s a head scratcher. BusinessWeek named search engine Cuil, which launched prematurely, lost their VP Product and now has near zero traffic, as one of the most successful U.S. startups of 2008.

Why? They say it attracted lots of attention when it launched (true, but it wasn’t positive attention), and they say that Cuil has a larger search index than Google (which doesn’t appear to be true). They miss Cuil’s big possible tech advantage, which is IP on how they handle search queries that may be much cheaper than the way Google and others do it.

BusinessWeek generally has intelligent coverage of startups. This time, they blew it. Cuil may yet live to see success, but 2008 was a bad, bad year for them and they had no place on this list.

Update: In the comments and here BusinessWeek says the list is based on who raised the most venture capital over the last four quarters. But Ning and others aren’t included who raised more.