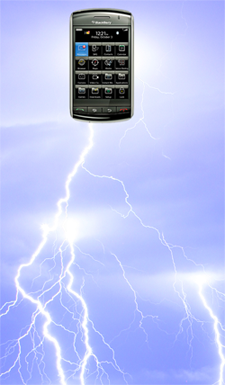 Someone at InformationWeek could probably use a vacation right about now.

Earlier today the site ran a post titled “BlackBerry Storm Causes Major AT&T Outages“, in which it described the network issues the telecom giant has been having over the last day. The title refers to BlackBerry’s recently-launched (and widely panned) touchscreen handset that is supposed to take the iPhone head-on. It might even make sense – perhaps enough people bought the phone over the holiday that a traffic spike took the network down.

Unfortunately the story is about a weather-related power failure that took the network offline, and appears to have nothing to do with the BlackBerry Storm, which isn’t even available on the AT&T network (it’s a Verizon exclusive).

“The wireless carrier said a weather-related power failure in Bloomfield, Mich., was the cause of the problem. The disruptions varied for subscribers, as some experienced dropped calls, while other had no access to voice or data services. Other users experienced slower mobile data service, or no access to AT&T’s 3G data network.”

InformationWeek corrected the goof quickly, but not before it was snagged by Google News and a few other syndication portals on the web. You can also see the original version in the site’s cache.

Obviously someone over there has written the phrase “BlackBerry Storm” a few too many times.

Thanks to Colby Lavin for the tip.