Call it micro-classifieds. Paul Rawlings, a developer in the UK, launched Tweebay on Christmas Day, a classifieds listings service for Twitter. You use your Twitter account to buy and sell stuff (perfect for those unwanted holiday gifts). Instead of entering your Twitter password, you simply follow Tweebay on Twitter, and you confirm your bids via direct message (Twitter’s private messaging channel). This method should be used more often to authenticate Twitter accounts, as it does not require people to give out their passwords.

The advantage of selling things on Twitter is that you can alert everyone following you on the service that you have something to sell. Whether or not people will be more willing to buy something from a Twitter friend than from an eBay stranger remains to be seen. But the idea of social classifieds is gaining steam. And there are already ways to sell stuff on Twitter (see iList).

Right now, there is no way to actually pay for items via Tweebay (options are on the way). It simply connects buyers and sellers, and they have to figure out payments (which is less than ideal). Perhaps Rawlings should look at integrating Twitpay, Tipjoy, or Paypal directly. Tweebay took a day to develop using Twitter’s APIs, and is just a side project of Rawlings’ company ScreenReach. If it picks up users, Rawlings says he will develop it further. (He might have to change the name, though—eBay might consider it a violation of its trademark). 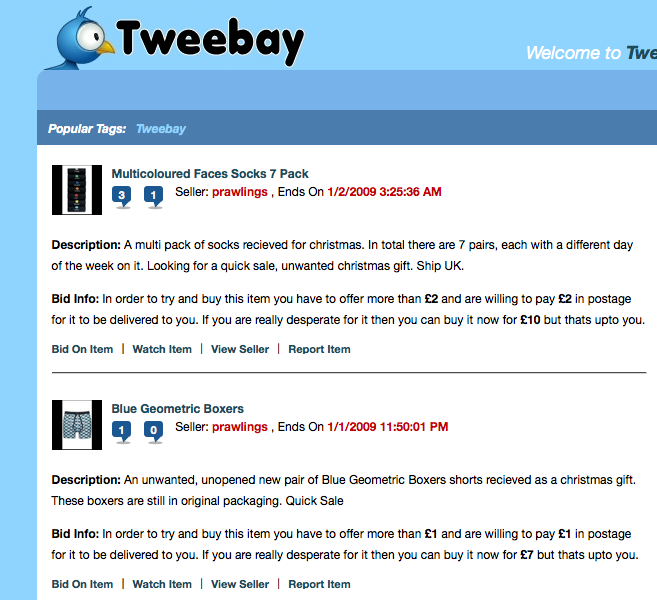