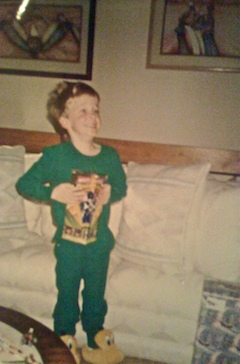 Long before my interests turned to gadgets and gizmos, life was as simple as could be. Wake, bus, school, bus, Power Rangers. If other stuff happened on any given day, I don’t remember; if it didn’t involve Rita Repulsa and the Rangers, I didn’t really care.

I wasn’t alone in this, either. It seemed like every kid in town had latched on to the Rangers and wasn’t interested in letting go. We no longer played Tag or Dodgeball; we played “Sing the Power Rangers theme while punching at nothing”.

Every time we played – Hell, every time someone mentioned the show – there would be a heated debate over which kid was which Ranger. 3 kids would be fighting over the right to be Red Ranger, while another 3 would battle it out for Green. Occasionally, there might be some words over who would fill the suits of the Pink, Yellow, and Black Rangers. Never, however, did anyone care to brawl to be the Blue Ranger. No one wanted to be the Blue Ranger.

It’s not that I had anything against the other Rangers; they just weren’t for me. Red was too macho for his own good. Green was too greasy. Black was too smug. Pink and Yellow were… well, they were girls. But Blue… Blue was the man. He was a total geek, but he knew how to throw down. He could hack your computer, but he could also punch through your head.

During each day’s post-school Power Ranger watching spree, I’d do two things: I’d eat my snack, and I’d try to reenact what was going on in the show using my Power Ranger figurines. Allowance by allowance, I’d managed to amass almost the entire team..

Except for the Blue Ranger.

Every few weeks, my parents would take me to the toy store in search of Billy Blue. Trip after trip, nothing. Mountains of Red, Green… everything but Blue. What was going on? Were there more Blue fans out there than I realized? Did I just happen to go to the one school where I was his only fan? I didn’t understand. (I’ve since realized that the toy stores most likely just ordered far fewer Blue Rangers, as they had more trouble selling them.)

The nights got colder, and rooftops and rain gutters began to sparkle. Christmas was around the corner. “If anyone can do it,” I thought, “Santa can.”

I wrote my letter to Santa. Then I wrote another, just to make sure that he got the message. I’d dream of running to my toy chest, throwing back the lid, and seeing Blue resting on top, only to wake up empty handed.

Christmas came. Had my letters made it? Had I been good enough? I sat down in the couch that no one ever sat in unless it was Christmas, eyes fixed on the presents I knew to be mine. That’s when I spotted it. It was masked in appropriately themed paper, but the signature prism shape of the box couldn’t be mistaken.

I somehow managed to stay in that seat until it was my turn, forcing myself to focus on the musty grandma smell of the antique couch I was in, all the while pretending to be totally excited for everyone else with each present they opened.

I don’t remember leaving the chair, the walk to pick up my present, or the process of unwrapping it. All I remember is the Blue Ranger, staring back at me, ready to take his place in each day’s battle.

Thanks, Mom and Dad. I love you.