Just in is a statement from Facebook that they will ban the fast growing (but non-label-sanctioned) music service Project Playlist. Last Friday MySpace banned Project Playlist and removed all traces of the service from its site.

But Facebook remained silent even as music label insiders called them “irresponsible” and suggested litigation against them was on the way.

This is a big blow for Playlist, which just yesterday announced that they had their first label deal, with Sony BMG. The other three big music labels, however, remain hostile to the service.

The entire application has been removed (it used to be here), and the embedded playlists have been removed from user’s profiles. An image of what the application used to look like is below. Over 660,000 Facebook users are affected.

The Recording Industry Association of America (RIAA) initially contacted Facebook last summer requesting the removal of the Project Playlist application for copyright violation, and recently reopened those communications. We have forwarded the RIAA’s letters to Project Playlist so it can work directly with that organization and music labels on a resolution. In the meantime, the application must be removed to comply with the Facebook Platform Terms of Service. Our hope and expectation is that the parties can resolve their disagreements in a manner that satisfies the developer and copyright holder, that continues to offer a great experience to music fans, and that doesn’t discourage other developers from using Platform to share their creativity and test new ideas. 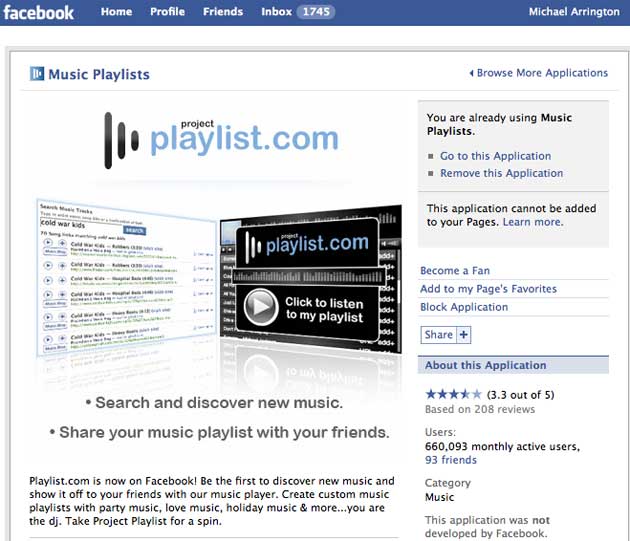