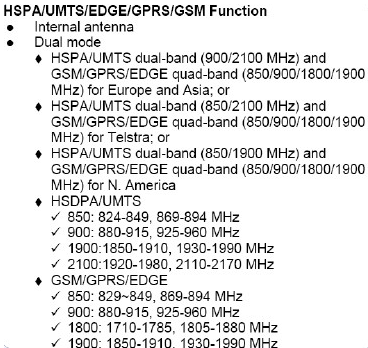 Earlier this morning, a wave of excitement broke out amongst HTC Touch HD hopefuls here in the US after some eagle-eye spotted 850 / 1900 MHz UMTS (AT&T’s 3G frequencies) bands in the not-for-public-consumption service manual. This, of course, went against October’s announcement that no such version was in the works, leading some to believe that HTC had silently changed their mind.

Not so, says HTC. We reached out for comment, and here was their response:

We were as surprised by these documents as you were. There are no plans to launch a version other than the 900/2100 model on the market today. Our belief is that since service manuals are not public facing documents, they are not fact checked with the same rigor as our product releases, but we are checking into how or why this information was included.

Now, you might see the word “today” at the end of that sentence and think they were sneakily trying to say “There are no plans to launch another version… today.”, so that they can go and launch another version next week. So, we reached out for a comment on their comment, and they verified that there are no plans to launch a version other than the 900/2100 model, period.